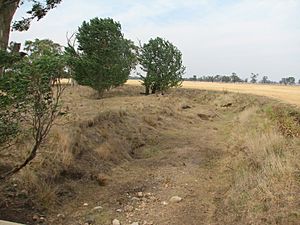 Coolaburragundy River, a perennial stream that is part of the Talbragar catchment within the Murray–Darling basin, is located in the Orana district of New South Wales, Australia.

The river rises on the south-western slopes of the Liverpool Range, at the junction of the Great Dividing Range, about 15 kilometres (9.3 mi) north-east of the town of Coolah at Pandoras Pass. Runoff from Coolah Tops National Park also flows into the river, as it flows generally south westerly and is joined by three minor tributaries, before reaching its mouth at the confluence with the Talbragar River near Leadville; dropping 265 metres (869 ft) over its course of 69 kilometres (43 mi).

There is sufficient water for limited irrigated cropping on the fertile alluvial soils along the valley. Although the river itself is usually dry, an aquifer lies below the Coolaburragundy valley between Coolah and Dunedoo.

The Craboon-Coolah branch off the Gwabegar railway line, closed in c. 1982, ran close to the Coolaburragundy River throughout its length.

All content from Kiddle encyclopedia articles (including the article images and facts) can be freely used under Attribution-ShareAlike license, unless stated otherwise. Cite this article:
Coolaburragundy River Facts for Kids. Kiddle Encyclopedia.