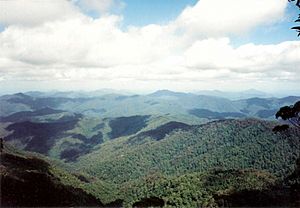 Bellinger River rises below Point Lookout within the Great Dividing Range, southeast of Ebor, and flows in a meandering course generally east, joined by four tributaries including Never Never River, before reaching its mouth at the Tasman Sea of the South Pacific Ocean, east of Urunga. The river descends 1,150 metres (3,770 ft) over its 69 kilometres (43 mi) course.

Waterfall Way is located adjacent to the middle reaches of the Bellinger River; and towards its mouth, the river is transversed by the Pacific Highway, near Raleigh.

Clement Hodgkinson was the first European to explore the area in March 1841.

All content from Kiddle encyclopedia articles (including the article images and facts) can be freely used under Attribution-ShareAlike license, unless stated otherwise. Cite this article:
Bellinger River Facts for Kids. Kiddle Encyclopedia.