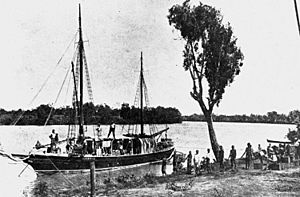 A ship unloading on the Roper River in 1917

The Roper River is in the Northern Territory of Australia. It flows east for 400 km from near Mataranka before it flows into the Gulf of Carpentaria.

The Roper was first explored by Europens in 1845, when the explorer Ludwig Leichardt crossed on his way west from Moreton Bay to Port Essington. He name it after a member of his group, John Roper. It is can be used by boats as far as the Roper Bar, and in the 1880's there were several paddlesteamers working on the river.

All content from Kiddle encyclopedia articles (including the article images and facts) can be freely used under Attribution-ShareAlike license, unless stated otherwise. Cite this article:
Roper River Facts for Kids. Kiddle Encyclopedia.