The Yarrowee River (or Yaramlok in the indigenous language) is a perennial river of the Corangamite catchment, located in the Central Highlands region of the Australian state of Victoria.

The Yarrowee is a major tributary and catchment of the Barwon River. The river's origins are in the hills at Gong Gong, and it is notable for passing through the settlement of Ballarat and crossing the City of Ballarat local government area before becoming the Leigh River in the vicinity of Cambrian Hill and Golden Plains Shire.

The river is a secondary water supply for the city of Ballarat. Its catchment contains several tributaries in the urban area including Gnarr Creek, Gong Gong Creek, Little Bendigo Creek and Warrenheip in the north eastern reaches and; Redan Creek, Canadian Creek and Buninyong Creek in the southern reaches. The river flows through the Ballarat suburbs of Gong Gong, Nerrina, Brown Hill, Black Hill, Ballarat East, Ballarat Central, Golden Point, Redan, Mount Pleasant, Sebastopol, Mount Clear, Magpie and Cambrian Hill. Tributaries in the catchment run through most other Ballarat suburbs and the river also marks the border between several suburbs.

It is a seasonal watercourse with highly varying levels of flow, often swelling in the winter months and prone to flash flooding, though it is not unusual for its flow (and that of its tributaries) to at times stop altogether. 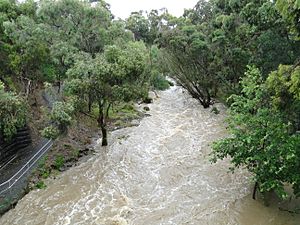 Prior to the European settlement of Australia, the river was an important place for the Boro gundidj, a tribe of the Wathaurong Indigenous Australian people as they based themselves around its northern stretches. At the present-day site of Ballarat, the river was "three to four yards wide" and "clear and limpid... teeming with the native blackfish". In its natural state, it would flow until December, then become a chain of ponds until the autumn rains came.

The river was important to the first settlers (squatters) of the region, with William Cross Yuille establishing his home near the swamp that is now Lake Wendouree, that was an important part of the river's catchment. Bullock drivers, carrying loads to and from the distant stations, would camp at Ballarat above "a large permanent waterhole in the creek below, [where] the bullocks could be trusted not to stray far in the lush grasses of the creek flats."

The Ballarat gold rush brought dramatic changes to the river. It was used as a source of water for extensive placer mining. The first bridge, a crude wooden structure, was built in 1855 at the present site of Bridge Road in response to increasing coach traffic.

Indigenous inhabitants were driven away from the river by the increasing rush of new settlers. During the 1860s, much of the river and its tributaries were sealed as drains using quarried bluestone to prevent erosion and help mitigate frequent flooding. The river was known to flood in the early days. In 1869 a serious flood of the Yarrowee River put most of the lower section of the city including Bridge and Grenville Street underwater and causing the loss of two lives. In 1877 the Gong Gong reservoir was built to alleviate flooding and to Lake Wendouree as the primary water source for Ballarat. By the turn of the century, the river had become heavily polluted during the early industrialisation of Ballarat.

During the 1960s, the river through the Ballarat CBD was re-routed, concreted and built over. As a result, it now forms an underground drain running under Grenville Street. Many other parts of the river also became wide and deep concrete stormwater drains. Several stretches of the river, remain, however in its natural bush and parkland setting. Since the 1980s, major initiatives have been undertaken to restore the river's state and vegetation and several natural wetlands have also been re-established along the river's course. The river suffered flash flooding during the 2010 and the 2011 Victorian floods. A Victorian Government–funded A$1 million clean up of the river over three years was announced in July 2013; yet by May 2014 problems of sewage contamination remained a problem near Ballarat.

The first non-indigenous people in the area gave it the name Yuille's Creek after local pastoralist William Cross Yuille. It is believed that the name Yarrowee was derived from Yaramlok, the name given to the river by the Wathaurung people. According to historian Jennifer Barnes the aboriginal word means "gum tree growing in water". Barnes also suggests that aborigines called the river 'Nambrook'. She cites historian Weston Bate who claimed that the aboriginal word was 'Yar-ar-way' and Arthur Jenkins who claims it was 'Yarmlock'. Barnes also suggests miners had referred to it as the 'Wee Yarrow'. The latter gives rise to alternative theories including a derivation of Yarrow Water, Scotland, attributed to the early Scottish settlers of the area.

Communities and bridge crossings along the river

There are many crossings over the Yarrowee River, including road, rail and pedestrian. Some additional roads allow passage through shallow sections of the river when the water levels are low.

All content from Kiddle encyclopedia articles (including the article images and facts) can be freely used under Attribution-ShareAlike license, unless stated otherwise. Cite this article:
Yarrowee River Facts for Kids. Kiddle Encyclopedia.