Ballarat railway station is located on the Serviceton line in Victoria, Australia. It serves the city of Ballarat opening on 11 April 1862.

The extensive building complex is of major architectural and historical significance to Ballarat with most of its original 19th-century features intact. Preserved historic features include the largest surviving interlocking mechanical swing gates in Victoria at Lydiard Street, signal boxes and goods sheds and it is one of only three stations in Victoria to have had a 19th-century train shed (along with Geelong and St Kilda). The railway complex is listed on the Victorian Heritage Register. 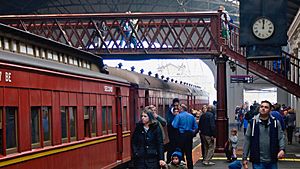 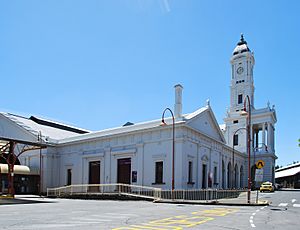 Construction on Ballarat West Railway Station began in 1862 with the original buildings constructed at a cost of almost 22,000 pounds with the original railway line to Melbourne going via Geelong to service the booming Ballarat goldfields.

A bluestone engine shed was built to the south and the goods shed to the north were added in 1863. In 1877, the footbridge and waiting rooms on the south side were added,. In 1885, hand-operated railway gates were added at Lydiard Street, along with the "B" signal box used to operate it on the western side.

Following the opening of the direct line from Ballarat to Melbourne in December 1889, the increase in patronage led to plans to upgrade the station. A grand portico, stationmaster's office and clocktower were designed in 1888 and added in 1891, although no clock was installed in the tower. With the amalgamation of the Ballarat East and West Town Councils in 1921 to form the City of Ballarat, and the closure of Ballarat East station, the station gradually dropped the name West Ballarat.

On 13 December 1981, fire badly damaged the interiors of the 1888 section including the station-master's office, waiting room, booking office, dining room and clock tower. All of these areas were later repaired and retained. Many of the original features were restored however some interiors including the booking office were subsequently modernised.

In 1983, the Public Transport Corporation proposed to demolish the level crossing gates at Lydiard Street. The City of Ballarat, National Trust and Historic Buildings Council responded with a campaign to save the gates. A clock was added to the tower in 1984.

In 1990, conservationists succeeded in their lobby to preserve the railway gates and an automated mechanical system was built to allow for the continued use of the historic gates. Additional restoration was carried out in 2005 with the roof replaced with quarried Welsh slate to match the original southern roof. 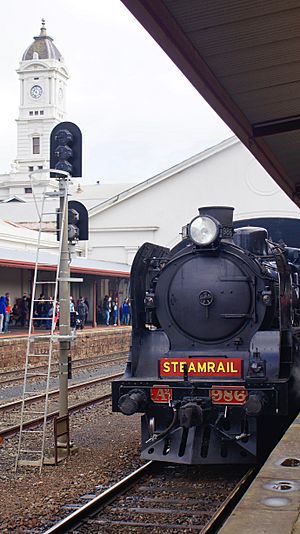 A2 986 locomotive at platform two

Following the 2006 Regional Fast Rail project and the introduction of V/Line VLocity trains as well as services to Ararat in 2005, passenger numbers at Ballarat station increased by as much as 40% a year. The resulted in the call for a second station, with Wendouree opening in June 2009 to alleviate congestion primarily caused by park and ride commuters from Ballarat's outer western suburbs. The station saw a further increase in trains following the resumption of services to Maryborough.

On 30 May 2020, a VLocity passenger train operated by V/Line failed to stop at Ballarat station and crashed into a set of crossing gates protecting the Lydiard Street North level crossing. Four men were onboard the Ballarat-bound service and were injured in the collision, including the driver and conductor. The Australian Transport Safety Bureau is investigating the incident.

The agency's preliminary report was released on 6 September. The report indicates that the train had traveled through the station at 23:35, at a speed of approximately 100 kilometres per hour (62 mph) before passing a departure signal at stop and coming to a stop 600 metres west of the station having passed through two separate level crossings. 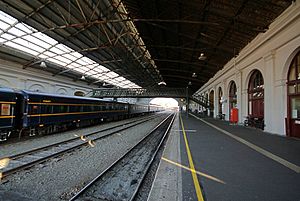 Eastbound view from Platform 1 in December 2007

Ballarat has two side platforms. It is serviced by V/Line Ballarat, Ararat and Maryborough line services.

The station is the official starting point of two multiuse trails:

All content from Kiddle encyclopedia articles (including the article images and facts) can be freely used under Attribution-ShareAlike license, unless stated otherwise. Cite this article:
Ballarat railway station Facts for Kids. Kiddle Encyclopedia.