Mildura is a regional city in north-west Victoria, Australia. Located on the Victorian side of the Murray River, Mildura had a population of just over 31,000 in 2011. When nearby Wentworth is included, the area had an estimated urban population of 50,011 at June 2015. It is the largest settlement in the Sunraysia region. Mildura is a major horticultural centre notable for its grape production, supplying 80% of Victoria's grapes. Many wineries also source grapes from Mildura. Other key crops produced in the district include citrus, almonds and dried fruit.

The city's central business district is located just a short distance from the banks of the Murray. Langtree Avenue is the main shopping and dining precinct in Mildura, and part of the street is a pedestrian mall. The other major retail precinct is along Fifteenth Street in the Mildura South area, where a mid-sized undercover shopping mall and several big box stores are located. The city's name was taken from the Mildura homestead, an early sheep station which covered most of the area. The urban area of Mildura is surrounded by a horticulture area, known as the traditional pumped district, where the original grape and citrus blocks were located with water irrigated from the Murray River.

Mildura has a long history of orange and grape farming.

There are several theories as to the origin of the name Mildura. While it was the name of the sheep station, without precedent in the English language, most historians believe it to have originated from Indigenous Australian words. However, the etymology of Mildura is not entirely certain as in several of the local dialects the words have different meanings. The word dura is generally thought to mean "earth", "sand" or "rock", at least in Latje Latje language. However, usage of the word mill can vary in dialect and is used to mean "red" or "water", and thus, interpretations of the name can vary from "red earth" to "water rock". 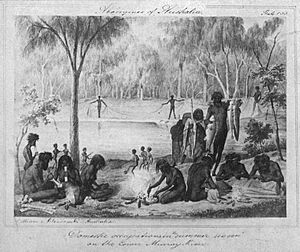 William Blandowski's 1857 depiction of Jarijari (Nyeri Nyeri) people including men hunting, women cooking and children playing near Merbein, Victoria. A form of kick and catch football is apparently being played in the background.

Many Aboriginal people lived around the site of Mildura because of the abundant food. Local tribes included the Latje Latje and Yerre Yerre.

The first Europeans in the area arrived in 1857 and brought sheep to graze the rich pastures.

A major drought in Victoria from 1877 to 1884 prompted Alfred Deakin, then a minister in the State Government and chairman of a Royal Commission on water supply to visit the irrigation areas of California. There he met George and William Chaffey.

In 1886, Canadian-American irrigator George Chaffey came to Australia and selected a derelict sheep station known as Mildura as the site for his first irrigation settlement, signing an agreement with the Victorian government to spend at least £300,000 on permanent improvements at Mildura in the next twenty years.

After much political wrangling, the settlement of Mildura was established in 1887. The Post Office opened on 23 January 1888. 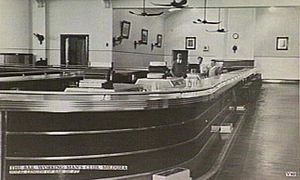 The bar of the Mildura Working Man's Club was noted in the Guinness Book of Records as the longest bar in the world until 1995 when it was removed during renovations.

The nearby towns of Wentworth, Gol Gol, Curlwaa and Yelta sprang up in the mid-to-late 19th century. In the 1890s came the scourge of the rabbit. This devastated the sheep farmers, especially south of the Murray. There was also a financial recession at this time. Combined, these factors restricted growth of the new settlement.

After this period, the new settlement grew and grew. It was soon the main town of the district. Suburbs and new satellite towns sprang up. From the 1920s, a number of 'suburban' train services were established to Merbein and Red Cliffs. These were operated by railcars.

Post war Mildura experienced a large influx of migrants particularly from Mediterranean countries including Italy and Greece. Many of these migrants were attracted by the unskilled labour offered by the fruit picking industry.

In 1934 Mildura was officially proclaimed a city. 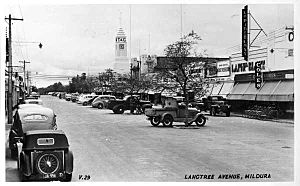 In 2004 there was a controversial proposal by the Victorian Government to build a state-level Long Term Containment Facility (LTCF) for Industrial Waste in Nowingi, approximately 50 km south of Mildura. The site is a small enclave of state forest surrounded by national park, and contains habitat important to a number of threatened species.

The abandoning of the LTCF proposal was received with jubilation by opponents of the LTCF not only in the Mildura area and elsewhere in Victoria, but also across the border in South Australia where there were fears that in reputation, if not in substance, the toxic waste could affect the water supply via the Murray River and thereby the fruit-growing industries of the Riverland and Murraylands.

The Mildura Rural City Council and residents spent almost $2 million fighting the Government's proposal for the LTCF at Nowingi. On 10 January 2007 the Victorian Government did not rule out some form of reimbursement for the Rural City of Mildura council's legal and other costs in opposing the LTCF. "The general rule is that people bear their own costs, that is most likely to apply in this case ... but I've indicated and I am prepared to talk to the council and mayor about the whole issue of how Mildura moves forward and I'll do that," John Thwaites said.

Mildura is situated on flat land without hills or mountains on the southern bank of the Murray River and surrounded to the west, north and east by lakes and billabongs including Lake Hawthorn, Lake Ranfurly and Lake Gol Gol. Several towns surround Mildura on the flat plains including Merbein to the west as well as Irymple and Red Cliffs to the south which could be considered suburban areas or satellite towns separated by small stretches of open farmland.

While the land along the river and irrigation channels is fertile, much of the land around Mildura is also dry, saline and semi-arid.

Mildura is a largely low-rise and low density urban area that is overwhelmingly dependent upon private automobiles for transportation. Residential dwellings consist almost solely of single-family detached homes on relatively large allotments. The population has been growing rapidly for several decades and most of the residential growth has occurred in the south-western and southern parts of the urban area.

The central business district is located at the northern end of the urban area, fronting onto the Murray River. The main shopping street of Mildura is Langtree Avenue, which features a pedestrian mall and shopping centre. However, this shopping precinct competes with the Mildura Central Shopping Centre, located at the opposite end of the urban area on the corner of Fifteenth Street and Deakin Avenue. Fifteenth Street is also the main strip of big box stores and other commercial enterprises.

The tallest buildings are the two storey 1934 Old Mildura Base Hospital, two storey Marina Dockside apartments completed in 2010 and the three storey tower/spire of the 1920s T&G building.

Mildura has a semi-arid climate (Köppen climate classification BSk) with hot summers and cool winters. It is only about 50 metres above sea level despite being several hundred kilometres from the coast.

Rainfall totals are about 280 mm a year and are spread evenly across the months and seasons with Winter and Spring having the most rainy days. 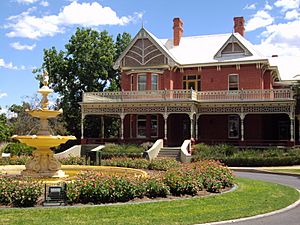 Since early settlement Mildura has been home to artists, writers and creative people. Organisations such as the Red Cliffs Musical Society, Eisteddfod, Mildura Ballet Guild and Mildura Country Music Festival have helped grow a reputation for home grown talent and creative community. The hub of this community is the Mildura Arts Centre, which began as a gallery space at Rio Vista House in the 1950s and became fully established in 1956 with the building of a new regional art gallery and performing arts theatre. In 2012, after two years of construction, the new Mildura Arts Centre opened. 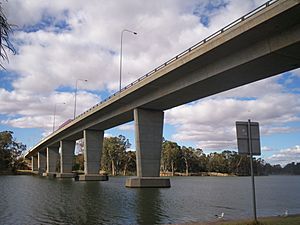 The George Chaffey Bridge over the Murray River, leading to New South Wales 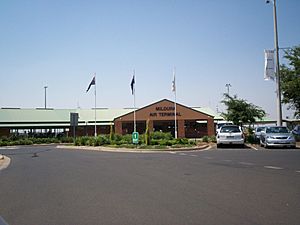 Mildura is on the intersection of the Sturt Highway from Adelaide to Sydney, and the Calder Highway to Melbourne via Bendigo. Deakin Avenue, the main street of Mildura, is known as the longest straight avenue in Australia, at 12.1 km. Sunraysia Bus Lines, Swan Hill Bus Lines and Dysons Bus Services operate V/Line bus services that connect Mildura to various parts of Victoria and southern New South Wales. Greyhound Australia run buses to Adelaide and Sydney via Canberra. NSW TrainLink run buses to Sydney. The Henty Highway Bus Service runs buses to Horsham.

Mildura has a railway connection to Melbourne, which is used for freight transport. In May 2006, it was announced that the Mildura line would receive a $73 million upgrade using gauge convertible sleepers.

The songs Mildura (Home of Mine) and Come to Mildura – the Land of Winter Sunshine were written by Reg. Stoneham in the 1920s.

Mrs G. H. Ball’s My Old Home Town (Mildura) was recorded on the B side of John Collinson’s first recording of Waltzing Matilda in 1926.

All content from Kiddle encyclopedia articles (including the article images and facts) can be freely used under Attribution-ShareAlike license, unless stated otherwise. Cite this article:
Mildura Facts for Kids. Kiddle Encyclopedia.