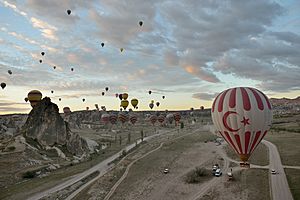 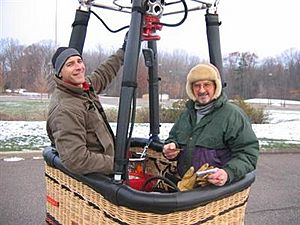 Hot air ballooning is the activity of flying hot air balloons. Attractive aspects of ballooning include the exceptional quiet (except when the propane burners are firing), the lack of a feeling of movement, and the bird's-eye view. Since the balloon moves with the direction of the winds, the passengers feel absolutely no wind, except for brief periods during the flight when the balloon climbs or descends into air currents of different direction or speed. Hot air ballooning has been recognized by Fédération Aéronautique Internationale (FAI) as the safest air sport in aviation, and fatalities in hot air balloon accidents are rare, according to statistics from the National Transportation Safety Board (NTSB).

All content from Kiddle encyclopedia articles (including the article images and facts) can be freely used under Attribution-ShareAlike license, unless stated otherwise. Cite this article:
Hot air ballooning Facts for Kids. Kiddle Encyclopedia.