Daylesford is a town in Victoria, Australia. It is in the foothills of the Great Dividing Range, within the Shire of Hepburn, and about 108 kilometres north-west of Melbourne. The town was first settled in 1852 as a gold-mining town. There were 2,548 people living in Daylesford in 2016.

The area around the town, including Hepburn Springs to the north, is known for its natural spring mineral spas. Over 80 per cent of Australia's sparkling mineral water is found in this area.

Daylesford is one of Australia's few spa towns. Many people visit for the spas, as well as the restaurants and galleries. It is also the filming location for the third season of The Saddle Club. 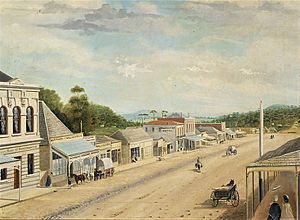 The area was the home of the Djadja Wurrung Aborigines. Farmers began to move into the district in 1838. In 1848, Irish immigrant John Egan took up land on the future town site then known as Wombat Flat. He and a party of searchers found gold in 1851 on land now covered by Lake Daylesford. This started a local gold rush. More gold was found around the area. The town site was surveyed and founded in 1852. At first the town was called Wombat, and later renamed Daylesford.

By the 1860s all the alluvial gold had been found. Large mines were built to get the gold that was found underground in the quartz reefs. Mining continued until the 1930s. In later years Daylesford became associated as being a fashionable spa resort, this ended during the Great Depression. In the 1990s it became fashionable again. 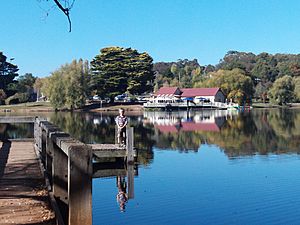 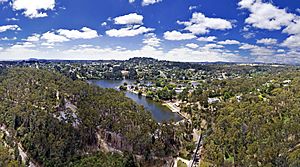 The Daylesford-Hepburn Springs area, has 65 mineral springs. This is more than 80 per cent of Australia’s known mineral water springs. As a result, there are a number of spa developments including Hepburn Bathhouse &amp; Spa, Mineral Spa at Peppers Springs Retreat and Salus Spa, Lake House. The town holds a number of annual events, including the ChillOut Festival in March each year, the largest gay and lesbian festival in rural and regional Australia; the Harvest Week Festival; the lavender festival; and the Hepburn Springs Swiss Italian Festival celebrating the town's Swiss-Italian heritage.

Major industries in the economy of Daylesford today are healthcare, accommodation and food, and retail trade. 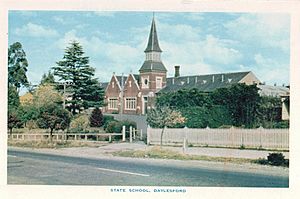 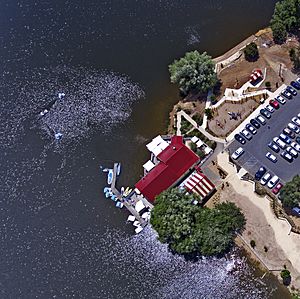 The Daylesford Boathouse from the air.

The Midland Highway runs directly through the town. It links to Castlemaine in the north and Ballarat in the south-west.

The railway to the town closed in 1978. The railway layout at Daylesford station was unusual in that the lines from Creswick and Carlsruhe both entered the station from the same end. The Daylesford Spa Country Railway currently operates a Sunday tourist service to Musk and Bullarto along the line towards Carlsruhe.

The town has an Australian Rules football team which plays in the Central Highlands Football League. There is also the Daylesford and Hepburn United Soccer Club also known as the Saints .The Saints have won four league titles in their 20-year history along with two cup finals. 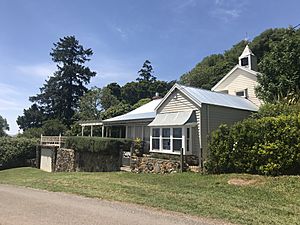 All content from Kiddle encyclopedia articles (including the article images and facts) can be freely used under Attribution-ShareAlike license, unless stated otherwise. Cite this article:
Daylesford, Victoria Facts for Kids. Kiddle Encyclopedia.