Hepburn Springs is predominantly Edwardian architecture unlike the Victorian architecture of nearby Daylesford. This is due to the devastation of the 1906 bushfire which destroyed most buildings in the settlement.

Hepburn Springs is located in the Wombat State Forest between former volcanoes - Mt Franklin and Wombat Hill. The prevalence of mineral water in the area is related to the distance from the great dividing range and the volcanic nature of the geology. 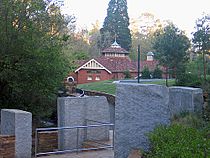 In the 1864 its citizens met at the Savoia Hotel and petitioned the government to protect the mineral springs from mining - the water was rated above gold and the Hepburn Mineral Spring Reserve was created in 1865. Many of its residents came from 'spa' areas in Italy, Germany and England and appreciated its value. A Bathhouse was created in the 1890s which has been remodelled several times. The latest remodelling opened in 2008. Several springs exist in the main reserve - Soda, Sulphur, Pavilion, Locarno and Wyuna. Golden Spring, Hendersons and Lithia Spring are located in the vicinity. 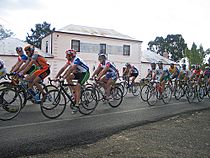 Pasta was made in Hepburn Springs from 1865

The influence of the Swiss Italians of Australia - Italian speaking Swiss from the cantons of Ticino and Grison and the northern Italians - is still present in the township through the names of its residents, the names of its springs (Locarno) and buildings (Savoia Hotel, Parma House, Perinis, Bellinzona) and the annual Swiss-Italian Festa.

The heart of the Italian speaking community was the area around the Savoia (Spring Creek) Hotel and the Macaroni Factory. The Savoia is named after the royal family of the unified Italy. An Italian reading library was located at the hotel and pasta was made opposite in Lucini's Macaroni Factory which was also home to the Democratic Club. Lucini's moved from Lonsdale Street, Melbourne in 1865, where they had set up as the first pasta factory in Australia in 1864. Vanzetta's bakery supplied bread and Crippa, Perini and the Gervasonis (Yandoit Creek) produced wine.

A local delicacy is bullboar which is a sausage made from beef, pork, garlic and spices. In 2005 Daylesford Secondary College came second in ABC's Young Gourmets by making bullboars from the Gervasoni and Sartori recipes which gained much media attention over the fate of Charlotte the pig, with little concern for the steer involved! The Bullboar has been named an endangered recipe by the Slow Food Movement.

In 2007 the Melbourne Immigration Museum featured a display entitled Wine Water and Stone reflecting the Swiss and Italian heritage of the area. 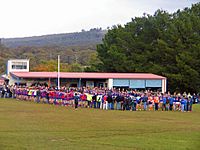 Hepburn loves the Burras and the Laurie Sullivan Recreation Reserve

Hepburn Springs has 7 sites on the Victorian Heritage Register: Hepburn Mineral Springs Reserve including the bathhouse and the pavilion; Hepburn Pool which was named Victoria's Favourite Built Place in 2004; Parma House; Blowhole Gold Diversion Tunnel where Chinese miners diverted the Jim Crow Creek; Former Macaroni Factory which is still owned by the descendants of the Lucini family; Jim Crow Creek Gold Mining Diversion Sluice and Breakneck Gorge Puddling Site which is located near the Blowhole.

The Palais is a well known and popular bar and music venue which regularly attracts national and international acts including Paul Kelly, Mark Seymour and Lloyd Cole. The Palais was a popular dance venue in the 1920s - 1950s and has a sprung wooden floor which is good for dancing.

The recreation reserve is a popular place for walking amongst the trees planted by Laurie Sullivan, many of which are now memorials to local stalwarts who were instrumental in the development and management of the reserve.

The area is well known for its health, wellbeing and food. Several day spas utilising mineral water are located in the township as well a wide range of restaurants, cafe, hotels, guest houses and accommodation options.

The town is surrounded by the Hepburn Regional Park. There are many opportunities for short or long bushwalks, often along old gold mining water sluices and peppered by mineral springs.

The local Australian Rules Football team is the Hepburn Burras who play at the Laurie Sullivan Recreation Reserve in 20th St, competing in the Central Highlands Football League. In summer the Hepburn Cricket team also play at the reserve. Hepburn football and cricket clubs have been successful clubs in the early twentyfirst century.

Golfers play at the course of the Hepburn Springs Golf Club on Golf Links Road.

All content from Kiddle encyclopedia articles (including the article images and facts) can be freely used under Attribution-ShareAlike license, unless stated otherwise. Cite this article:
Hepburn Springs, Victoria Facts for Kids. Kiddle Encyclopedia.