The forest is managed by the Department of Sustainability and Environment. The management plan covers firewood and other products; protection of water supplies, conservation of biodiversity, and conservation of landscape. Other areas of importance include cultural heritage, research, education, tourism, recreation, mineral exploration, mining, and grazing.

"This forest was the testing ground for techniques, ideas and attitudes that shaped resource management and sawmilling well into the twentieth century." (Forest historian Norm Houghton)

The Dja Dja Wurrung peoples lived the area that is now state forest land. Before European settlement, the forest covered a larger area than it does today.

The forest was logged heavily during the gold rush era of the mid-1800s. The wood was used for tunnel supports, sleepers for tramways, lining of mining shafts, firewood for mine boilers, piles for piers and docks, electric poles, and heavy construction timbers. In 1860 the 1860 Land Act (Section 80) was created, which placed some restrictions on logging trees. In 1871, the Wombat State Forest was set up.

By 1884, there were 36 saw mills in the Wombat and Bullarook Forests. The wood was sent to Melbourne, Sandhurst, and Ballarat. There was little replanting and the young trees were burned. Eventually the forest was ruined, and timber harvesting was stopped.

After the gold rush, the forest slowly began to regrow. By the 1960s selected logging was begun to try to improve the quality of the forest. In the 1970s and 80s, the area was called the "Midlands Forest Management Area". This included the planting of pine trees for commercial logging.

In 2001, the local community published its own findings about the forest's sustainable management. This was one of the first examples of community involvement in a state-run management plan. In 2010, community worried that logging could begin in the forest because the State Government gave out logging licenses in western Victoria.

The Wombat Forest is divided by the Great Dividing Range. The forest grows along both sides of the Dividing Range, from Creswick to Mount Macedon. There are about 400 extinct volcanoes in a stretch that extends from Kilmore in the north to Mt Gambier in South Australia. Some of these volcanoes, including Mount Babbington, Mount Wilson and Blue Mount are in the Wombat Forest.

The geology make up is of Ordovician or Tertiary sediments. The rock types are of volcanic origin, dated to the Palaeozoic era. Quaternary basalts, all of volcanic origin, were in the west of the Wombat State Forest. These lands have been cleared for farming. However, Ordovician or sedimentary soils, with poor soil conditions for farming, have remained undisturbed. Since the Pliocene the forest has changed from ash rainforest to a dry sclerophyll forest.

The Wombat State Forest is the headwaters of the Lerderderg, Campaspe and Loddon rivers. An interesting part of the forest is a large number of mineral springs. These are about 80% of Australia’s mineral springs. The mineral waters are rich in calcium, silica, magnesium, iron and sulphur. The volcanic activity of the region has added carbon dioxide to the water that is seen in the form of bubbles emerging from the springs. 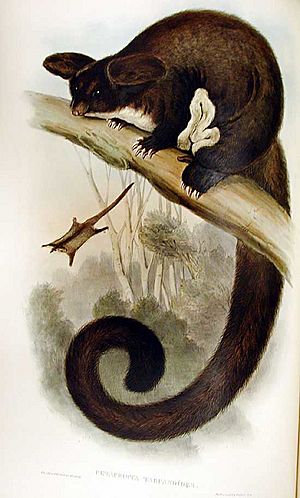 Within Victoria, the Wombat State Forest is the Greater Glider's most western range.

The native fauna are marsupials, monotremes, reptiles, amphibians, bats and birds. The Greater Glider (Petauroides volans) is the largest possum found in this forest. It lives in the western part of the Wombat State Forest. Several threatened bird species live in the forest including the Great Egret, Intermediate Egret, Grey Goshawk, Australian Masked Owl, Powerful Owl and Square-tailed Kite. The forest is also home to the Red-browed Treecreeper and Olive Whistler.

Armillaria luteobubalina, a fungus that causes forest dieback, has been found. The forest has 111 fungal species spread over its wide and varying habitats. These include “native and introduced species as well as a selection of lichenised fungi and myxomycetes (slime moulds).”

Lyonville Mineral Springs, Garden of St Erth, the Lerderderg Heritage River Walk, and Nolans Creek Picnic Area are some of the tourist attractions in the forest. Other historic places include the Andersons Mill, Balt Camp, Pioneer Sawmill, and Yankee Mine. There is also a heritage diesel railway in the forest.

All content from Kiddle encyclopedia articles (including the article images and facts) can be freely used under Attribution-ShareAlike license, unless stated otherwise. Cite this article:
Wombat State Forest Facts for Kids. Kiddle Encyclopedia.