Kids Encyclopedia Facts
This page is about the regional city known as Mount Gambier. For other uses, see Mount Gambier (disambiguation).

Mount Gambier is the second most populous city in South Australia with an estimated urban population of 28,929. The city is located on the slopes of Mount Gambier (volcano) in the south east of the state, about 450 kilometres (280 mi)* south-east of the capital Adelaide and just 17 kilometres (11 mi)* from the Victorian border, it is the most important settlement in the Limestone Coast region and the seat of government for both the City of Mount Gambier and the District Council of Grant.

The peak of the dormant volcano was the first place in South Australia named by European explorers. It was sighted in 1800 by Lieutenant James Grant from the survey brig, HMS Lady Nelson, and named for Lord James Gambier, Admiral of the Fleet. The peak is marked by Centenary Tower, built in 1901 to commemorate the first sighting, and at 192 metres (630 ft)* above sea level the landmark is the city's highest point.

The city is known for its geographical features, particularly its volcanic and limestone features, most notably its Blue Lake, parks and gardens, caves and sinkholes.

Before European settlement, the Buandig (or Boandik) people were the original Aboriginal inhabitants of the area. They called it 'ereng balam' or 'egree belum', meaning 'home of the eagle hawk'.

The peak of the dormant Mount Gambier crater was sighted in 1800 by Lieutenant James Grant from the survey brig, HMS Lady Nelson, and named for Lord James Gambier, Admiral of the Fleet.

The Henty brothers who owned large holdings in Portland, Western Victoria, laid claim to the land but were forced to retreat when the lands were granted to Evelyn Sturt, the brother of the explorer Charles Sturt. Industries soon began to appear. The Post Office opened on 22 September 1846, John Byng built the Mount Gambier Hotel in 1847, and Dr Edward Wehl arrived in 1849 to begin a flour-milling operation. 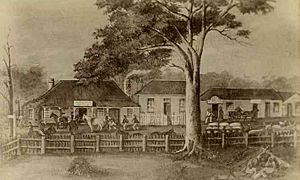 Settlement of Gambierton in 1856 including Mitchell's Hotel

On 9 December 1954, Mount Gambier was officially declared a city, and is now an important tourism centre in south-east South Australia. 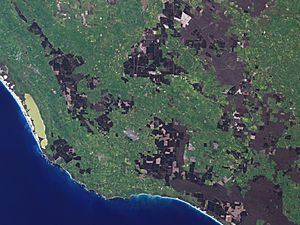 Mount Gambier and region as seen from space

Mount Gambier's urban area is located mainly along the northern slopes and plain of a maar volcano of the same name, Mount Gambier. Comprising several craters, it is part of the Newer Volcanics Province complex of volcanoes. One of these contains a huge lake of high-quality artesian drinking water which changes colour with the seasons. In winter, it is a steel grey and then changes to a spectacular cobalt blue in the summer, giving rise to its name, Blue Lake. This 70-metre (230 ft) deep lake also accommodates a range of unusual aquatic flora and fauna, in particular fields of large stromatolites. There are several other craters in the city including Valley Lake and the Leg of Mutton Lake. The region surrounding the city also includes other volcanic features such as Mount Schank, along with many karst features such as water-filled caves and sinkholes.

The urban area extends outside of the City of Mount Gambier into the District Council of Grant where the following suburbs now exist: Suttontown, Mil Lel and Worrolong to the north of the city, Glenburnie to the east, Compton to the west, and Moorak and OB Flat to the south.

Mount Gambier has a warm-summer Mediterranean climate (Koppen: Csb). The town has warm dry summers and cool wet winters. July is the wettest month with an average of 99.6 mm falling on 22 days whilst February normally records the lowest rainfall with an average of 25 mm on an average 8 days. The highest ever temperature recorded in Mount Gambier was 44.9 °C on 2 February 2014 and the lowest ever temperature recorded was −3.9 °C on 20 June 1950 and 2 July 1960. Mount Gambier has only 40.5 clear days on an annual basis.

The government in the south-east area of the state, consisting of three local councils, amounted to a single administration. In consequence, many residents of Victoria used to look across the border to Mount Gambier as their centre. Consequently, during the 1970s many elderly locals relocated to Victor Harbor and Moonta, both rural areas but with more resources available to cope with an ageing population. A 1976 study found that less than 10 per cent (around 160 people) of residents aged over 65 had lived in the area for less than 5 years, leading to a lack of specific aged-care facilities.

According to the 2006 Census the population of the Mount Gambier census area was 24,905 people, making it the largest urban area in the state outside Adelaide, and the 50th largest urban area in Australia. Approximately 51.7% of the population were female, 84.9% were Australian born, over 91.5% of residents were Australian citizens and 1.6% were indigenous.

The most popular industries for employment were Log Sawmilling and Timber Dressing (8%), School Education (4.8%) and Retail Trade (3.8%), while the unemployment rate is approx. 7%. The median weekly household income is A$814 or more per week, compared with $924 in Adelaide.

According to the 2006 Census, 60.0% of residents identified themselves as being Christian. The largest denominations represented were Catholics at 21.5%, Anglicans at 11.4%, the Uniting Church at 8.6%, and Presbyterians at 6.9%. 26.9% of people claim no religion. A further 12.1% of people chose either not to state their beliefs, or did not adequately define them.

The city's Civic Centre, around Cave Gardens, is the hub of the city's arts and includes the Riddoch Art Gallery, South Australia's major regional art gallery located in the adaptively reused old town hall complex. The complex was extended in 2011 to include "The Corner", a modern building which includes a theatre. Nearby are the public library and the old post office. 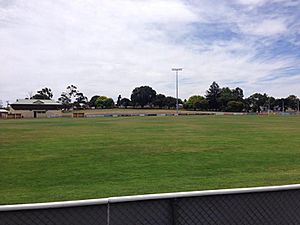 Motor sport is also popular, with the main facilities being the McNamara Park road racing circuit, and the Borderline Speedway, a 372-metre (407 yd) dirt track oval speedway nicknamed "The Bullring". Borderline Speedway hosts an annual Sprintcar event called the "Kings Challenge", first run in 1995 and is held in January each year a week before the Grand Annual Sprintcar Classic in nearby Warrnambool (Victoria), and two weeks before the Australian Sprintcar Championship. Borderline has played host to many Australian and South Australian speedway championships throughout its over 50-year history and is regarded as one of the best run and promoted speedways in Australia. The speedway is currently managed and promoted by former star sprintcar driver, Mount Gambier native Bill Barrows. In 2007, Borderline hosted the fifth and final round of the Australian Solo Championship. The round and the championship was won by Australia's own reigning World Champion Jason Crump. 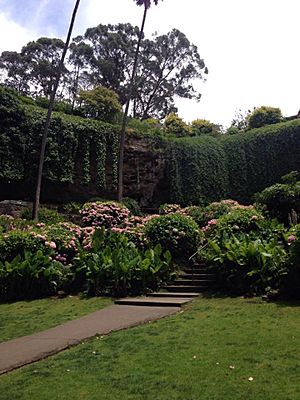 The 120m Mount Gambier Gift held annually on the first Saturday in December at Vansittart Oval is the 2nd richest professional footrace in South Australia. Resurrected in 2001 the athletic carnival includes races from 70m to 1600m and attracts athletes from all over Australia, mostly from South Australia and Victoria. Of the eleven Mount Gambier athletic carnivals held to date, three Victorians have won the 120 m Gift. On 3 December 2011, 21-year-old Wallace Long-Scafidi won the Gift for the second year in a row. The race was not held in 2012, and to this date continues to go unheld.

There is only one national sporting side which is the Mount Gambier Pioneers. The Pioneers entered the South Eastern Basketball League in 1988 and currently play in the SEABL (South East Australian Basketball League). The Pioneers play at the Icehouse (Mount Gambier Basketball Stadium) which seats over 1,000 people and is also home to the Mount Gambier Basketball Association. The Pioneers have had three SEABL championships which occurred in 2003, 2014 and 2015. The 2003 side was rated second in the top 5 sides to have ever played in the league by a group of special selectors in 2012 to mark the leagues 25th anniversary celebrates. The Pioneers have been four time champions of the South Conference in the SEABL, occurring in 2003, 2013, 2014 and 2015. The Pioneers were also twice Runners-up of the South Conference occurring in 1997 and 2000.

In 2015 the current President Neale Boase, Head Coach Richard Hill and Club Captain Matt Sutton will lead the team into its 28th season in the SEABL, with star NBL player Brad Hill and US imports Tyrone Lee and Desmond Simmons.

The Mount Gambier Pioneers celebrated their 25th anniversary in 2013. This anniversary weekend also included a 10-year re-union of the 2003 championship side and a highlight game before the men played, including two teams of Pioneers players from the 25 years of existence. The Pioneers also listed their 25 best players of all time during this weekend. The number one Pioneer of all time going to 2003 Championship player and former import Jamie 'X-Factor' Holmes.

In 2015, The Mount Gambier Pioneers officially started their hall of fame status for people of the club. The Hall of Fame is divided into two categories; Player Members and General Members. There are a list of criteria that these people have to make. There are currently 6 Hall of Fame members: Bill Hately (2015) Tony Cook (2015) Jason Joynes (2015) Soyna Knight (2015) Jason Sedlock (2015) Jamie Holmes (2015)

All content from Kiddle encyclopedia articles (including the article images and facts) can be freely used under Attribution-ShareAlike license, unless stated otherwise. Cite this article:
Mount Gambier, South Australia Facts for Kids. Kiddle Encyclopedia.