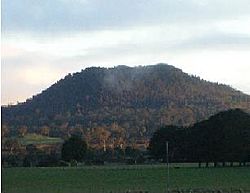 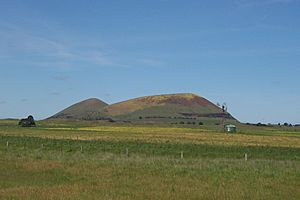 The Newer Volcanics Province is a geological area which is a volcanic field, formed by the East Australia hotspot across south-eastern Australia. It covers an area of 15,000 square kilometres (5,800 sq mi), with over 400 small shield volcanoes and volcanic vents. The area contains the youngest volcanoes in Australia.

The volcanoes date from the Late-Pleistocene to Holocene ages. The area is characterised by flat lava flows, forming a plain above which rise numerous small scoria cones, tuff rings, and maars. The most recent eruptions in the region took place at Mount Schank and Mount Gambier, estimated about 5000 years BP, when several maars were formed and associated lava flows spread around the cones.

Volcanoes within the province include:

All content from Kiddle encyclopedia articles (including the article images and facts) can be freely used under Attribution-ShareAlike license, unless stated otherwise. Cite this article:
Newer Volcanics Province Facts for Kids. Kiddle Encyclopedia.