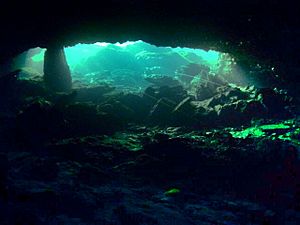 Cave diving is underwater diving in water-filled caves. It may be done as an extreme sport, a way of exploring flooded caves for scientific investigation, or for the search for and recovery of divers lost while diving for one of these reasons. The equipment used varies depending on the circumstances, and ranges from breath hold to surface supplied, but almost all cave diving is done using scuba equipment, often in specialised configurations. Recreational cave diving is generally considered to be a type of technical diving due to the lack of a free surface during large parts of the dive, and often involves decompression.

In the United Kingdom it originated, and to a large degree remains, an extension of the more common activity of caving, and in the United States an extension of the more common sport of scuba diving. Compared to caving and scuba diving, there are relatively few practitioners of cave diving. This is due in part to the specialized equipment and skill sets required, and in part because of the high potential risks due to the specific environment.

Despite these risks, water-filled caves attract scuba divers, cavers, and speleologists due to their often unexplored nature, and present divers with a technical diving challenge. Underwater caves have a wide range of physical features, and can contain fauna not found elsewhere.

The procedures of cave diving have much in common with procedures used for other types of penetration diving. They differ from open water procedures mainly in the emphasis on navigation, gas management, operating in confined spaces, and that the diver is physically constrained from direct ascent to the surface during much of the dive.

As most cave diving is done in an environment where there is no free surface with breathable air allowing an above-water exit, it is critically important to be able to find the way out before the breathing gas runs out. This is ensured by the use of a continuous guideline between the dive team and outside of the flooded cave, and diligent planning and monitoring of gas supplies. Two basic types of guideline are used: permanent lines, and temporary lines. Permanent lines may include a main line starting near the entrance/exit, and side lines or branch lines, and are marked to indicate the direction to the nearest exit. Temporary lines include exploration lines and jump lines.

Decompression procedures may take into account that the cave diver usually follows a very rigidly constrained and precisely defined route, both into and out of the cave, and can reasonably expect to find any equipment such as drop cylinders temporarily stored along the guideline while making the exit. In some caves, changes of depth of the cave along the dive route will constrain decompression depths, and gas mixtures and decompression schedules can be tailored to take this into account.

Most open-water diving skills apply to cave diving, and there are additional skills specific to the environment, and to the chosen equipment configuration.

Cave diving is one of the most challenging and potentially dangerous kinds of diving or caving and presents many hazards. Cave diving is a form of penetration diving, meaning that in an emergency a diver cannot swim vertically to the surface due to the cave's ceilings, and so must swim the entire way back out. The underwater navigation through the cave system may be difficult and exit routes may be at considerable distance, requiring the diver to have sufficient breathing gas to make the journey. The dive may also be deep, resulting in potential deep diving risks.

Visibility can vary from nearly unlimited to low, or non-existent, and can go from one extreme to the other in a single dive. While a less-intensive kind of diving called cavern diving does not take divers beyond the reach of natural light (and typically no deeper than 100 ft, and penetration not further than 200 ft), true cave diving can involve penetrations of many thousands of feet, well beyond the reach of sunlight. The level of darkness experienced creates an environment impossible to see in without an artificial form of light. Caves often contain sand, mud, clay, silt, or other sediment that can further reduce underwater visibility in seconds when stirred up.

Cave diving has been perceived as one of the more deadly sports in the world. This perception may be exaggerated because the majority of divers who have lost their lives in caves have either not undergone specialized training or have had inadequate equipment for the environment. Some cave divers have suggested that cave diving is in fact statistically much safer than recreational diving due to the much larger barriers imposed by experience, training, and equipment cost, but there is no definitive statistical evidence for this claim.

There is no reliable worldwide database listing all cave diving fatalities. Such fractional statistics as are available, however, suggest that very few divers have ever died while following accepted protocols and while using equipment configurations recognized as acceptable by the cave diving community. In the very rare cases of exceptions to this rule there have typically been unusual circumstances. Much the same can be said for other modes and applications of diving. There is little doubt that competence, good preparation and appropriate equipment reduce the risk of all hazardous activities. 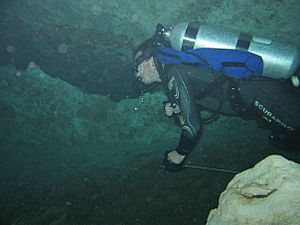 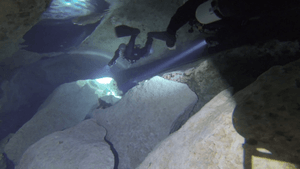 Most cave divers recognize five general rules or contributing factors for safe cave diving, which were popularized, adapted and became generally accepted from Sheck Exley's 1979 publication Basic Cave Diving: A Blueprint for Survival. In this book, Exley included accounts of actual cave diving accidents, and followed each one with a breakdown of what factors contributed to the accident. Despite the unique circumstances of each individual accident, Exley found that at least one of a small number of major factors contributed to each one. This technique for breaking down accident reports and finding common causes among them is now called Accident Analysis, and is taught in introductory cave diving courses. Exley outlined a number of these resulting cave diving rules, but today these five are the most recognized:

Cave divers are taught to remember the five key components with the mnemonic: "The Good Divers Always Live".

In recent years new contributing factors were considered after reviewing accidents involving solo diving, diving with incapable dive partners, video or photography in caves, complex cave dives and cave diving in large groups. With the establishment of technical diving, the use of mixed gases—such as trimix for bottom gas, and nitrox and oxygen for decompression—reduces the margin for error. Accident analysis suggests that breathing the wrong gas for the depth or not analyzing the breathing gas properly has also led to cave diving accidents.

Cave diving requires a variety of specialized procedures, and divers who do not correctly apply these procedures may significantly increase the risk to the members of their team. The cave diving community works hard to educate the public on the risks they assume when they enter water-filled caves. Warning signs with the likenesses of the Grim Reaper have been placed just inside the openings of many popular caves in the US, and others have been placed in nearby parking lots and local dive shops.

Many cave diving sites around the world include open-water basins, which are popular open-water diving sites. The management of these sites try to minimize the risk of untrained divers being tempted to venture inside the cave systems. With the support of the cave diving community, many of these sites enforce a "no-lights rule" for divers who lack cave training—they may not carry any lights into the water with them. It is easy to venture into an underwater cave with a light and not realize how far away from the entrance (and daylight) one has swum; this rule is based on the theory that, without a light, divers will not venture beyond daylight.

In the early phases of cave diving the analysis shows that 90% of accidents were not trained cave divers; from the 2000s on the trend has reversed to 80% of accidents involving trained cave divers. Modern cave divers' capability and available technology allows divers to venture well beyond traditional training limits and into actual exploration. The result is an increase of cave diving accidents, in 2011 the yearly average of 2.5 fatalities a year tripled. In 2012 fatalities reached the highest annual rate to that date at over 20.

As response to the increase in fatalities during the years 2010 onwards, the International Diving Research and Exploration Organization (IDREO) was created in order to "bring awareness of the current safety situation of Cave Diving" by listing current worldwide accidents by year and promoting a community discussion and analysis of accidents through a "Cave Diver Safety Meeting" held annually. 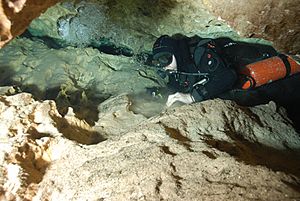 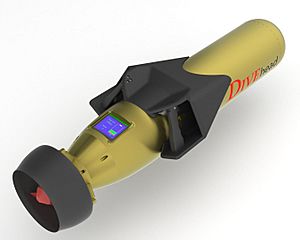 Equipment used by cave divers ranges from fairly standard recreational scuba configurations, to more complex arrangements which allow more freedom of movement in confined spaces, extended range in terms of depth and time, allowing greater distances to be covered in acceptable safety, and equipment which helps with navigation, in what are usually dark, and often silty and convoluted spaces.

Scuba configurations which are more often found in cave diving than in open water diving include independent or manifolded twin cylinder rigs, side-mount harnesses, sling cylinders, rebreathers and backplate and wing harnesses. Bill Stone designed and used epoxy composite tanks for exploration of the San Agustín and Sistema Huautla caves in Mexico to decrease the weight for dry sections and vertical passages.

Stage cylinders are cylinders which are used to provide gas for a portion of the penetration. They may be deposited on the bottom at the guideline on preparation dives, to be picked up for use during the main dive, or may be carried by the divers and dropped off at the line during the penetration to be retrieved on the way out.

One of the high risk hazards of cave diving is getting lost in the cave. The use of guidelines is the standard mitigation for this risk. Guidelines may be permanent or laid and recovered during the dive, using cave reels to deploy and recover the line. Permanent branch lines may be laid with a gap between the start of the branch line and the nearest point on the main line. Gap spools with a relatively short line are commonly used to make the jump.

Line arrows are used to point towards the nearest exit, and cookies are used to indicate use of a line by a team of divers.

Silt screws are short lengths of rigid tube (usually plastic) with one sharpened end and a notch or slot at the other end to secure the line, which are pushed into the silt or detritus of the cave floor as a place to tie off a guideline when no suitable natural tie-off points are available.

Dive lights are critical safety equipment, as it is dark inside caves. Each diver generally carries a primary light, and at least one backup light. A minimum of three lights is recommended. The primary light should last the planned duration of the dive, as should the backup lights.

Jacques-Yves Cousteau, co-inventor of the first commercially successful open circuit scuba equipment, was the world's first open circuit scuba cave diver. However, many cave divers penetrated caves prior to the advent of scuba with surface supplied breathing apparatus through the use of umbilical hoses and compressors. Scuba diving in all its forms, including cave diving, has advanced in earnest since Cousteau introduced the Aqua-Lung in 1943.

All content from Kiddle encyclopedia articles (including the article images and facts) can be freely used under Attribution-ShareAlike license, unless stated otherwise. Cite this article:
Cave diving Facts for Kids. Kiddle Encyclopedia.