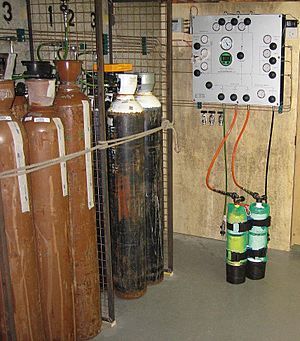 Narcosis while deep diving is prevented by filling dive cylinders with a gas mixture containing helium. Helium is stored in brown cylinders.

Nitrogen narcosis is a problem for underwater divers. It affects the brain and nervous system a lot like alcohol, but goes away when the diver rises to a shallower depth. It does not have lasting effects after the depth is reduced.

Who can get it

Any underwater diver who goes deeper than 30 m (100 ft)while breathing air, or any time when the pressure of nitrogen in the breathing gas is more than about 3,2 bar.

How to prevent it

The nitrogen gas dissolved in the diver affects the working of nerve cells. At higher pressures more nitrogen can be dissolved.

It starts off as a mild effect like being slightly drunk, but as the pressure increases it gets more serious, like getting more drunk. Eventually the diver may lose consciousness.

Why is it a problem

A diver who has nitrogen narcosis will have slower reactions and may not think clearly. If something goes wrong the diver may not be able to cope with the problem. This can be dangerous.

What to do about it

The diver can move to a shallower depth or change to a different breathing gas with less nitrogen. This will usually be a mixture containing helium.

All content from Kiddle encyclopedia articles (including the article images and facts) can be freely used under Attribution-ShareAlike license, unless stated otherwise. Cite this article:
Nitrogen narcosis Facts for Kids. Kiddle Encyclopedia.