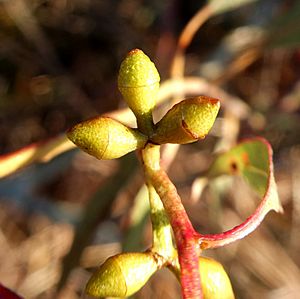 Eucalyptus rubida, commonly known as candlebark, ribbon gum or white gum, is a species of small to medium-sized tree that is endemic to south-eastern Australia. It has smooth bark, sometimes with rough bark at the base, lance-shaped or curved adult leaves, flower buds in groups of three, white flowers and cup-shaped, hemispherical or bell-shaped fruit.

Eucalyptus rubida was first formally described in 1899 by Henry Deane and Joseph Maiden in Proceedings of the Linnean Society of New South Wales. The specific epithet (rubida) is from the Latin word rubidus meaning "red", referring to the seasonally red bark.

In 1991, Lawrie Johnson and Ken Hill described two subspecies and the names are accepted by the Australian Plant Census as at December 2019:

Candlebark grows in woodland and forest, usually in shallow soils on tablelands, hills and slopes. Subspecies barbigerorum occurs on the Northern Tablelands north of Armidale. Subspecies rubida occurs on the Southern Tablelands of New South Wales, mainly on the northern side of the Great Dividing Range in Victoria, between Halls Gap and Delegate, and on the tablelands and mountain slopes of eastern Tasmania.

Subspecies barbigerorum is classified as "vulnerable" under the Australian Government Environment Protection and Biodiversity Conservation Act 1999. The main threats to the subspecies are habitat disturbance caused by agriculture, development and road work and by timber collection.

All content from Kiddle encyclopedia articles (including the article images and facts) can be freely used under Attribution-ShareAlike license, unless stated otherwise. Cite this article:
Candlebark Facts for Kids. Kiddle Encyclopedia.