Delegate lies just a few kilometres from the state border between New South Wales and Victoria. At the 2006 census, Delegate had a population of 306 people. The township of Delegate lies on the Delegate River.

The place name, Delegate, could have derived from an aboriginal word meaning "high mountains". The first village began in 1852 and was situated at Hayden's Bog on the property now called "Bendolba". Mount Delegate, or commonly known in the local area as "Delegate Hill", is situated across the border in Victoria and stands at approximately 1,325 metres (4,347 ft) above sea level. It is the only single mountain in the Great Divide and of an unusual shape. Because of its height, Mount Delegate now has several telecommunication towers servicing vital services to both NSW & Victoria. 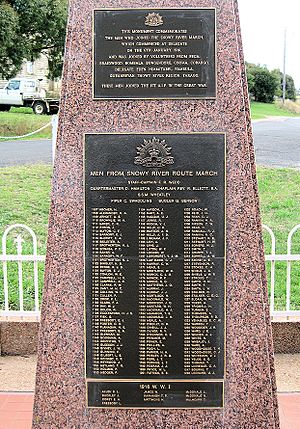 The Delegate area was settled by Europeans in the 1820s when Charles Campbell, youngest son of Robert Campbell of Duntroon, directed that "some of the shepherds move their animals towards the areas of the winter snows. They trekked, probably via Cooma, and settled a large number of stock in an area where they formed a new station. This the Campbells called Delegate. the stock spread over a large area and, as there was no other occupant of the district, 34,000 acres were annexed to the occupation of Robert Campbell, who later bought this property. Subsequently, while there were still no other serious competitors in the vicinity, Campbell's stock occupied a further 21,000 acres which came to be called Mt Cooper." Following Robert Campbell's death the property at Delegate passed to his unmarried daughter, Sophia and from her to her nephews, John and Fredrick Jeffreys.

In 1870 a petition was forwarded to the Council of Education to request educational facilities at Craigie, Corrowong and Delegate. In 1871 Delegate Public School was opened. Today Delegate Public School serves a community of children whose parents are farmers, professional people, those employed by the timber industry and others who work locally. The geographical location of Delegate Public School enables it to draw students from both New South Wales and Victoria.

The first place of worship on the Monaro (also known as Maneroo) district was the "Deligat" chapel. It was a slab building thatched with grass and stood on the bank of Church Creek and was of the Church of England denomination, now known as the Anglican Church of Australia. The site is identified in the Delegate Cemetery and marked by a shelter built during the 1988 Bicentennial Year. In October 1880 St Philip's Anglican Church in Heyden Street was licensed and consecrated in 1885. The Anglican Rectory was dedicated in 1938. In March 1978 the Anglican Parishes of Delegate and Bombala amalgamated to become the Parish of the Southern Monaro.

The original Catholic Church in Church Street, the street being appropriately named because of the church, was built in 1877 and in 1915 the present St Joseph's Catholic Church was built on the same site. The Catholic Parish of Delegate also includes St Peter's Corrowong west of Delegate. In 1921 the Sisters of St Joseph of the Sacred Heart (St Mary (MacKillop) of the Cross Order known as the "Brown Josephites") opened a school in Delegate which was first conducted in the church building. Sisters Alphonsus Kirton, Rodrigues Miller and Josephine Cahill, Cahill who in later years became Mother General of the Josephite Order, opened the school with 16 boys and 25 girls on the roll. The nuns first lived in Craigie Street on the site of the now Delegate Multi Purpose Service. A house was then purchased in Church Street for the nuns as a Convent and an adjacent outbuilding served as the school. In 1943 a new school building was constructed in the church grounds. The Sisters raised their school to make secondary education available to the people of Delegate. With the introduction of the Wyndham Scheme and bus transport the Secondary section closed in 1963. When the Presbytery closed in 1973 the Convent was sold and the nuns moved into the Presbytery and hence it became the new St Joseph's Convent. With the low numbers of Sisters to teach and an enrolment of only 33 pupils, St Joseph's Convent School closed in 1981. In November 2015 the Catholic Parish celebrated the 100 Year Centenary of the present church with a special Mass and dedicated a permanent history display in the former school building to record the history of the parish.

St Andrew's Presbyterian Church was opened in 1878. The Church was built by William Moore and originally had a shingle roof which was replaced by an iron roof in 1912. The original organ was installed in 1901 and the bell in the church grounds was erected in 1905. Families prominent in the Church's history are the Campbells, Rankins, Olivers, Sivewrights, Martins and others of Scotch ancestry. As numbers of Presbyterians diminished over the years the Church was sold in 2009. The Delegate Progress Association have taken ownership of the Church and local religious of other denominations now conduct services there to keep it maintained as part of the Delegate Community.

The local School of Arts building has a museum that displays the history of the area. Honour Rolls in the main part of the building record the names of locals who served in both wars as well as a memorial stone at the front of the building commemorating the original Men from Snowy River March in 1916. Like many country halls, it also served as a picture theatre for many years. Delegate was the start for the Men from Snowy Marches during World War I and World War II.

In the early 1920s, artist Hilda Rix Nicholas stayed in the Delegate area, where she painted several major works including In Australia and His Land. She returned and settled in the district with her husband Edgar Wright, and died there in 1961.

The Delegate Progress Association (DPA) is a vital part of the community and was twice featured on Channel 9 "A Current Affair". The Association operates from part of the residence of the old bank building built by the Commercial Banking Company of Sydney Limited in 1925. The DPA and the Bundian Way, a project of Eden Local Aboriginal Land Council, have now established a gallery in the old banking chambers.

In 2006 after a wait of more than 130 years, the eastern straight-line portion of the NSW and Victorian border was formally recognised at a historical ceremony at Delegate River, just south of Delegate. A crowd of over 300 people gathered at a site known as Allan's Peg on the Bonang Highway for the occasion, with the Governor of Victoria, Mr John Landy, and Governor of NSW, Professor Dame Marie Bashir officiating.

The Delegate Show Society at their Annual Show in 2011 launched a book outlining the local history entitled "From 'Dizligit' to 'Delegate' The Journey ".

All content from Kiddle encyclopedia articles (including the article images and facts) can be freely used under Attribution-ShareAlike license, unless stated otherwise. Cite this article:
Delegate, New South Wales Facts for Kids. Kiddle Encyclopedia.