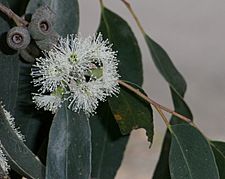 Eucalyptus obliqua, commonly known as messmate stringybark or messmate, but also known as brown top, brown top stringbark, stringybark or Tasmanian oak, is a species of tree that is endemic to south-eastern Australia. It has rough, stringy or fibrous bark on the trunk and larger branches, smooth greyish bark on the thinnest branches, lance-shaped to curved adult leaves, flower buds in groups of seven to fifteen or more, white flowers and cup-shaped or barrel-shaped fruit.

Eucalyptus obliqua was collected in 1777 by David Nelson and William Anderson during Cook's third expedition. The collections were made at Adventure Bay on Bruny Island in what is now Tasmania. The specimens were sent to the British Museum in London, where they were examined by Charles Louis L'Héritier de Brutelle. L'Héritier recognised the specimens as belonging to a new genus which he called Eucalyptus and gave the name Eucalyptus obliqua to the species. The type species is therefore E. obliqua. L'Héritier published the first formal description in 1789 in his book Sertum Anglicum. The specific epithet (obliqua) is from the Latin obliquus ("oblique"), in reference to the leaf bases of unequal length.

E. obliqua is widespread in cooler areas of south eastern Australia. It occurs from Kangaroo Island, through southeast South Australia, throughout Victoria and Tasmania, mainly east of the tablelands in New South Wales, with a few populations extending into southern Queensland. Thus the overall range of latitude is 28–43½°S. It occurs from sea level up to elevations of 1475 metres in the Northern Tablelands of New South Wales. The climate is humid or subhumid, with temperatures ranging from cool to warm, and annual rainfall ranging from 500 to 2400 millimetres. Severe winter frosts are common, severe drought extremely uncommon.

One of the most important Australian hardwoods, E. obliqua is often sold with E. regnans (Mountain Ash) as "Vic Ash" or "Tasmanian oak". It is slightly denser than E. regnans - estimates of density range from 720 kg/m3 to 830 kg/m3 - and harder too. The sapwood is pale brown, the heartwood light brown. It has an even texture, with straight grains sometimes interlocked, and well-defined rings. Gum veins are common.

The timber has moderate hardness and strength, but low durability. It splits easily, and is easily worked, glued and stained; it is also suitable for steam bending. It is mostly used for pulp production and for construction and manufacture, especially in house building, joinery, flooring, and furniture.

All content from Kiddle encyclopedia articles (including the article images and facts) can be freely used under Attribution-ShareAlike license, unless stated otherwise. Cite this article:
Messmate stringybark Facts for Kids. Kiddle Encyclopedia.