Eucalyptus delegatensis, commonly known as alpine ash, gum-topped stringybark, white-top and in Victoria as woollybutt, is a species of tree that is endemic to southeastern Australia. It has a straight trunk with rough, fibrous to stringy bark on the lower half of the trunk, smooth white bark above, lance-shaped to curved adult leaves, flower buds in groups of between seven and fifteen, white flowers and barrel-shaped or hemispherical fruit. 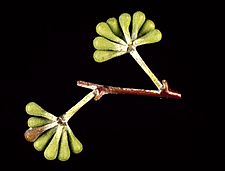 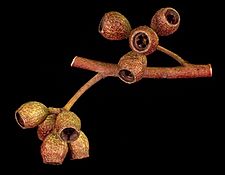 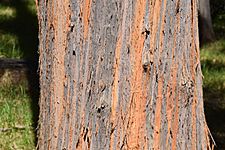 Eucalyptus delegatensis was first formally described in 1900 by Richard Thomas Baker from a specimen collected by William Baeuerlen, (previously known as Wilhelm Bäuerlen) on "Delegate Mountain". The description was published in Proceedings of the Linnean Society of New South Wales. The specific epithet (delegatensis) refers to the type location.

In 1985 Douglas John Boland described two subspecies and the names have been accepted by the Australian Plant Census:

Alpine ash is widespread and often dominant in grassy or wet subalpine forest, in deep fertile soil, often on slopes, and commonly forms pure stands. In New South Wales and the Australian Capital Territory it is found south from the Brindabella Range and in Victoria it occurs at altitudes between 900 and 1,500 m (3,000 and 4,900 ft) east of Mount Macedon. Subspecies tasmaniensis is endemic to Tasmania.

All content from Kiddle encyclopedia articles (including the article images and facts) can be freely used under Attribution-ShareAlike license, unless stated otherwise. Cite this article:
Alpine ash Facts for Kids. Kiddle Encyclopedia.