The grey goshawk (Accipiter novaehollandiae) is a strongly built, medium-sized bird of prey in the family Accipitridae. The white morph of this species is known as the white goshawk 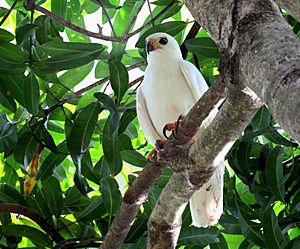 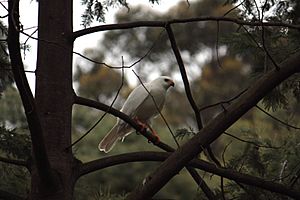 The grey morph has a pale grey head and back, dark wingtips, barred grey breast and tail, and white underparts. The white morph is the only bird of prey in the world to be entirely white, although there is the Gyr falcon and Siberian goshawks which are white.

The grey goshawk is found along the coasts of northern, eastern and south-eastern Australia, Tasmania and rarely Western Australia. The variable goshawk was previously considered a subspecies.

Their preferred habitats are forests, tall woodlands, and timbered watercourses.

Grey goshawks often seem to vary their prey selection opportunistically. For an Accipiter, they relatively often select mammals such as rabbits, possums, and bats. Other prey can include small reptiles, and insects. However, the most frequent prey type are most often birds. Evidence from different parts of the range shows females select larger prey than males, with males largely keeping to small to mid-sized passerines while females often prey on larger prey such as currawongs, gamebirds (including megapodes) and even herons. Pigeons and parrots are a popular prey item for grey goshawks. Evidence indicates that this species is less agile in the air and less skilled at twisting pursuits over the ground than co-occurring brown goshawks but, on the other hand, the grey species is more powerful and so select typically larger prey.

Hunting is often done by stealth, but grey goshawks are willing to pursue their prey before catching it with their talons.

Grey and white goshawks interbreed freely. They partner for life, breeding from July to December. They nest in tall trees on a platform of sticks and twigs with a central depression lined with green leaves. The female lays a clutch containing 2 or 3 eggs, which are incubated for about 35 days. Chicks fledge 35–40 days after hatching.

The female is usually responsible for incubating the eggs and feeding the young. The male does most of the hunting.

All content from Kiddle encyclopedia articles (including the article images and facts) can be freely used under Attribution-ShareAlike license, unless stated otherwise. Cite this article:
Grey goshawk Facts for Kids. Kiddle Encyclopedia.