The Loddon River, an inland river of the north–central catchment, part of the Murray-Darling basin, is located in the lower Riverina bioregion and Central Highlands and Loddon Mallee regions of the Australian state of Victoria. The headwaters of the Loddon River rise on the northern slopes of the Great Dividing Range east of Daylesford and descend to flow north into the Little Murray River, near Swan Hill. The river is impounded by the Cairn Curran (147,000 ML) and Laanecoorie (12,000 ML) reservoirs. The Tullaroop Creek tributary which joins just above Laanecoorie Reservoir, is impounded by the Tullaroop Reservoir (72,950ML).

An anabranch of the Loddon River may be found in the upper reaches of the river. 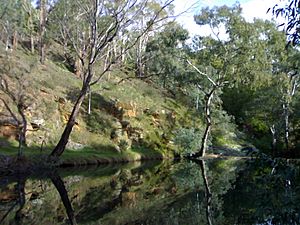 The Loddon River at Vaughan Springs. 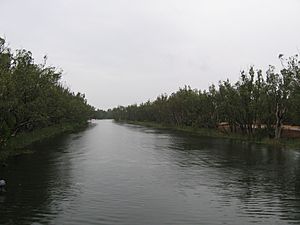 The Loddon River at Bridgewater.

The Loddon River is the second longest river in Victoria after the Goulburn and, along with the Avoca River, drains a substantial part of central Victoria. From source to mouth, the river is joined by nineteen minor tributaries; and descends 567 metres (1,860 ft) over its 392-kilometre (244 mi) course.

The river rises below Musk near Trentham and Lyonville from where it heads northward to Glenlyon and on to Loddon Falls. It then flows generally northward through Guildford and Newstead, 40 kilometres (25 mi) west of Bendigo. After Newstead the river flows into the Cairn Curran Reservoir before emerging at Baringhup and continuing north to Eddington. The river then flows into Laanecoorie Reservoir at Laanecoorie and then to Newbridge, where it flows due north to Bridgewater On Loddon, where waterskiing, swimming and fishing are popular recreational pursuits.

The river then passes Serpentine with high summer flows that commence at the small concrete weir to the Loddon Weir, also known as Fernihurst Weir. After the weir, water is diverted to the Waranga Western Channel. Downstream from Loddon Weir the river averages 7 to 14 metres (23 to 46 ft) wide, and up to 26 metres (85 ft) wide at certain points, with a bank height of around 3 metres (9.8 ft). Approximately 10 kilometres (6.2 mi) south of Kerang water flows are increased due to water entering from the Macorna Channel, and the higher flows are maintained for the next 15 kilometres (9.3 mi) of river up to the Kerang Weir. The final stretch of the river flows through saltbush and Black Box forest. The river ends at its confluence with the Little Murray River at Benjeroop, near Swan Hill.

When reasonable water levels flow, the Mill Rapid downstream of the Calder Hwy bridge provides technical whitewater kayaking of Grade 3 standard featuring a short fast run. Access is usually via local roads on the west bank. Upstream of the Calder Hwy bridge kayakers and canoeists will have a pleasant paddling experience but may have to share the river with swimmers, fishers, and waterskiers.

At Bridgewater there is a designated 3.2-kilometre (2.0 mi) general waterskiing area, a 950-metre (3,120 ft) slalom and ski jump area. Waterskiing events held in this area include the Australian Masters in January, the pre-Moomba tournament in February and the Bridgewater Ski Club Tournament. Additionally, a 90-metre (300 ft) swimming area is designated at the Flour Mill Weir.

Fish found between Bridgewater to Serpentine include Murray cod and golden perch. The water downstream from the Loddon Weir can range between 5 to 7 metres (16 to 23 ft) deep and provides fishing opportunities for redfin, golden perch, silver perch, carp and to a lesser extent Murray cod. A vertical slot fishway was constructed next to the Kerang Weir in 2008. The main fish species in the river's lower reaches are redfin, golden perch and Murray cod.

There are weirs in Bridgewater and Kerang to keep water in the towns, but otherwise the river can dry up in summer. There is current work going on to determine and implement suitable environmental flows in the river. The pool upstream of the Bridgewater weir is used for watersports such as waterskiing. Both reservoirs are also used for motor boats and sailing. At the Loddon Weir there is road access which enables boats to be launched from the bank.

It was named by Thomas Mitchell in 1836 after the River Loddon in the English counties of Berkshire and Hampshire.

All content from Kiddle encyclopedia articles (including the article images and facts) can be freely used under Attribution-ShareAlike license, unless stated otherwise. Cite this article:
Loddon River Facts for Kids. Kiddle Encyclopedia.