The greater glider is the common name for three species of large gliding marsupials found in Australia. Until 2020 they were considered to be one species, Petauroides volans. In 2020 morphological and genetic differences, obtained using diversity arrays technology, showed there were three species subsumed under this one name. The two new species were named Petauroides armillatus and Petauroides minor.

These species are not closely related to the Petaurus group of gliding marsupials but instead to the lemur-like ringtail possum, Hemibelideus lemuroides, with which it shares the subfamily Hemibelideinae.

The greater gliders are found in eucalypt forests from Mossman, Queensland, to Daylesford, Victoria. 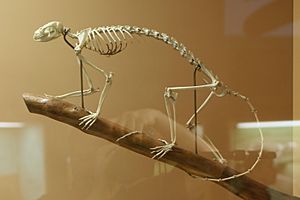 There is little obvious difference between the three species, which is why they were not recognized as separate species for 228 years.

Greater gliders have a head and body 39 to 43 centimetres (15 to 17 in) long, with the females generally being larger than the males. Their body is covered with a shaggy coat of fur that increases their apparent size, and the tail is long and bushy, ranging from 44 to 53 centimetres (17 to 21 in). The head is short with a pointed muzzle and their large ears are fringed and backed with long fur.

The feet have strongly recurved claws to grip onto bark or other surfaces. There are five toes on each foot. The first toe on the hind foot and the first two toes on the fore foot are opposable.

The fur is soft and up to 60 millimetres (2.4 in) long. Its colour is variable within a single population and ranges from white to brown and charcoal. Body mass varies clinally from 1,600 grams (3.5 lb) in southern Victoria to 600 grams (1.3 lb) in north Queensland.

Heat management in the greater gliders is performed by licking extremities and the ventral body surface, and direct evaporation is the main method of cooling. They can also use their gliding membranes to reduce heat loss by increasing the layer of insulation at the skin surface. The gliders are not well equipped to handle high ambient temperatures as they inefficiently use water for evaporation via salivation despite arboreal habitats often having limited water accessibility.

These gliders can digest low nutrient foliage. Specifically eucalypt leaf matter, which contains a variety of phenolic and terpenoid compounds and a high concentration of lignified fibre. These animals can digest about 50–60% of the leaf during its passage through the gut. Their guts have a specialized caecum that contains a population of bacteria that ferment food residues that remain undigested in the small intestine. For a population in a eucalypt forest near Maryborough, Queensland, it has been calculated that their daily energy intake is about 1130 kJ, which is provided by about 45 to 50 grams (0.099 to 0.110 lb) of dry matter daily.

Mature females will give birth to a single joey each year which is typically born in late autumn or early winter. The underdeveloped offspring will then spend the next four months within the pouch of the mother to suckle and develop, and will remain within the security of the pouch until nine months of age.

The greater glider is found in southern Queensland, eastern Australia, southeastern New South Wales, and the montane forests of the Victorian central highlands. It is usually tracked via spotlighting on transects (considered to underestimate the actual population size), radio tagging and owl-call playback.

The greater gliders choose habitat based on several factors, the dominant factor being the presence of specific species of eucalypt. Distribution levels are higher in regions of montane forest containing manna gum (E. viminalis) and mountain gum (E. dalrympleana, E. obliqua). Furthermore, the presence of E. cypellocarpa appears to improve the quality of habitat for the greater gliders in forests dominated by E. obliqua. Another factor determining population density is elevation. Optimal levels are 845 m above sea level. Within a forest of suitable habitat, they prefer overstorey basal areas in old-growth tree stands. 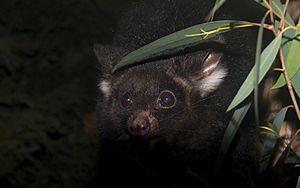 Head of a dark morph of the greater glider

The greater gliders are primarily nocturnal, spending the night foraging in the highest parts of the forest canopy. During the day, they spend most of their time denning in hollowed trees, with each animal inhabiting up to twenty different dens within its home range. The dens are often lined with leaves and strips of bark. This is why spotlighting has become a popular way of locating members of a population. When a strong light is directed at the eyes of a glider, the observer will see two bright red orbs reflecting back.

Within forests, males and females will have home territories and set borders between other individuals. For males, home territory ranges from 1.4 to 4.1 hectares (3.5 to 10.1 acres) while that of females is only 1.3 to 3.0 hectares (3.2 to 7.4 acres). Although home ranges may overlap, the animals remain generally solitary outside of the breeding season, and only rarely interact. In large and small patches of forest, the home territories will respectively be larger and smaller.

The gliding posture of the greater gliders is unique among marsupials. The forelimbs are folded so that the wrists are tucked under the chin, giving the patagium a triangular outline when outstretched. These animals regularly glide between high trees, and are able to use their tails to assist in steering. They avoid traveling along the ground whenever possible, and are slow and clumsy if forced to do so.

Greater gliders do not make any loud sounds, and are thought to communicate through scent marking. The animal's cloacal glands give it a generally musty smell. 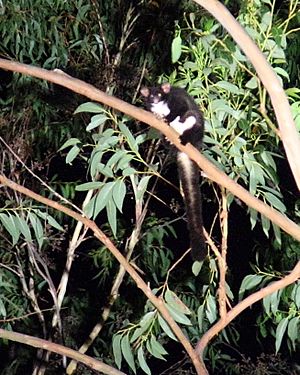 Due to its nocturnal lifestyle, a natural predator of the gliders is the Powerful Owl (Ninox strenua). It hunts by concentrating in pockets within their relatively large home range until populations of prey are depleted to a level that causes the owl to shift hunting grounds. Other predators include feral cats, introduced to Australia with the arrival of Europeans.

The breeding season for greater gliders is relatively brief, lasting from February to May, with births occurring between April and June. Females have a relatively well-developed pouch, opening towards the forward part of the animal, and containing two teats. Only a single young is born each year.

At birth, the young weighs only around 0.27 grams (0.0095 oz), but it does not begin to leave the pouch for about four months, by which time it is already furred and well developed. After leaving the pouch, the mother may carry it about on her back until it is weaned at about seven months of age. The young are independent at nine months, and reach sexual maturity between 18 months and two years after birth.

Greater gliders have been recorded living up to fifteen years.

Although previously thought to be related to the other gliding possums, the greater glider genus, Petauroides, is now known to be most closely related to the ringtail possums, and especially to the lemur-like ringtail possum, from which its ancestors diverged around 18 million years ago. In contrast, it diverged from the gliding possums much earlier, around 36 million years ago. Fossils of greater gliders are known from the late Pleistocene onwards, and show that the animal was once more widespread and inhabited other areas including parts of South Australia. 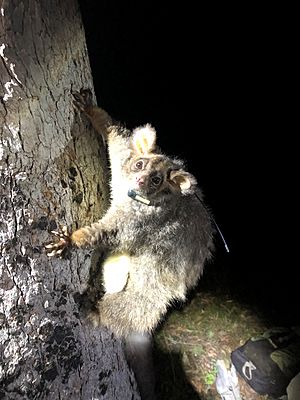 Greater Gliders are listed as vulnerable nationally, in Queensland and Victoria, under the EPBC Act, the Queensland Nature Conservation Act and Victorian Advisory List of Threatened Vertebrate Fauna.

All content from Kiddle encyclopedia articles (including the article images and facts) can be freely used under Attribution-ShareAlike license, unless stated otherwise. Cite this article:
Greater glider Facts for Kids. Kiddle Encyclopedia.