Mossman is a town and a locality in Far North Queensland, Australia, on the Mossman River. It is within the local government area of Shire of Douglas (between 2008 and 2013, it was within the Cairns Region). In the 2011 census, Mossman had a population of 1,732 people.

Mossman is located on the Captain Cook Highway 75 kilometres (47 mi) north of the regional city of Cairns, and 15 kilometres (9.3 mi) east of the Mount Carbine Tableland. Mossman Gorge, a popular attraction within Daintree National Park, is located west of town. Sugar cane farming is an important aspect of the local economy, with Mossman Central Mill, the only sugar mill in the district, processing the cane before sending it to Cairns for shipping domestically and internationally. 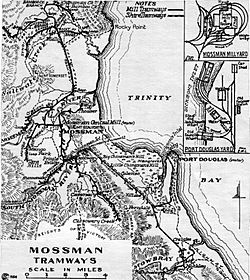 The district was originally known as Mossman River after the river which flows through it. The Mossman River, in turn, was named by the explorer George Dalrymple on 6 December 1873 after Hugh Mosman who discovered gold in Charters Towers. Dalrymple wrote "I named this river the Mossman River, after Mossman, an explorer and mining man, member of a very prominent mining family". The town was also known for a brief time as Hartsville after Daniel Hart, an early settler. Later the name was simplified to Mossman.

Mossman River Post Office opened by 1895 (a receiving office had been open from 1883) and was renamed Mossman in 1899.

The establishment and subsequent growth of Cairns and the completion of the Cairns Railway up through the Barron Gorge in 1891, gave a more direct gateway to the hinterland but, at this period, it was found that the Mossman district contained suitable land for sugar-growing. The establishment of the sugar mill at Mossman formed the nucleus of the town, which grew at the expense of Port Douglas.

The district was served by two separate 2-foot (610 mm) gauge tramway systems. Both at one time handled passengers and general goods, as well as sugar cane. Mossman district owes its present prosperity to these tramways which pioneered the first reasonable transport in the neighbourhood, for trafficable roads followed later.

During World War II, Mossman was attacked in a Japanese air raid on 31 July 1942. A single flying boat dropped a bomb fell near a house and injured a child.

Mossman Central Mill Company Limited started life as a grower owned co-operative sugar mill back in 1894. In 1897, Mrs Annie Rose fed the first sugarcane into the mill, with the mill producing its first sugar after crushing 27,905 tonnes of cane for the initial season.

Initially, sugar was shipped from Port Douglas, however road transport eventually came to the forefront and became the preferred mode of transport for sugar to the bulk sugar terminal in Cairns.

L.J.F. Prince (General Manager) pioneered the use of computers for cane payment accounting and, in 1971, Mossman purchased the first process control computer used in the world sugar industry. 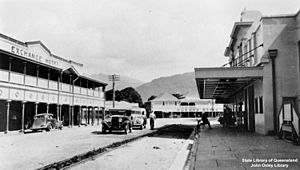 Mossman has a number of heritage-listed sites, including:

All content from Kiddle encyclopedia articles (including the article images and facts) can be freely used under Attribution-ShareAlike license, unless stated otherwise. Cite this article:
Mossman, Queensland Facts for Kids. Kiddle Encyclopedia.