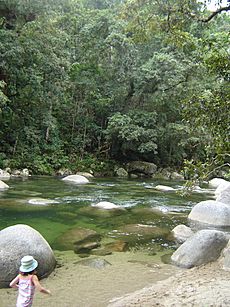 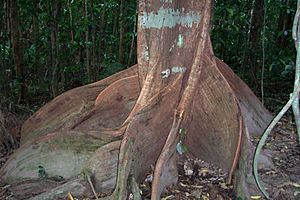 Mossman Gorge is located in the southern part of Daintree National Park in Far North Queensland, Australia, 80 kilometres (50 mi) north of the regional town of Cairns and about five kilometres from the cane-farming town of Mossman. It is part of the traditional homeland of the indigenous Kuku Yalanji people. A suspension bridge runs across Rex Creek close to where it enters the Mossman River, linking the carpark area to a 2.4-kilometre rainforest loop track walk.

Mossman Gorge was declared a part of Daintree National Park in 1967.

Fauna commonly observed in the gorge includes the Australian brushturkey, orange-footed scrubfowl, the brilliant metallic-blue Ulysses butterfly and the Boyd's forest dragon. More than 430 species of birds have been spotted in the gorge, along with 18 species of reptiles, 12 species of amphibians and several species of fishes. Seasonally, the buff-breasted paradise kingfisher visits, nests and breeds. Jungle perch or spotted flagtail fish are commonly observed in the river waters from the popular tourist spot at the river’s edge.

All content from Kiddle encyclopedia articles (including the article images and facts) can be freely used under Attribution-ShareAlike license, unless stated otherwise. Cite this article:
Mossman Gorge, Queensland Facts for Kids. Kiddle Encyclopedia.