This species comprises five subspecies found on many islands in the Lesser Sunda Islands as well as southern New Guinea and northern Australia. It is a terrestrial bird the size of a domestic chicken and dark-coloured with strong orange legs and a pointed crest at the back of the head. It utilises a range of forest and scrub habitats and has colonised many small islands throughout its range. It is prolific in suburban Darwin gardens, where people refer to it as a Bush Chook or Bush Turkey.

In general, populations seem to be stable and the conservation status of the species is considered to be of Least Concern. 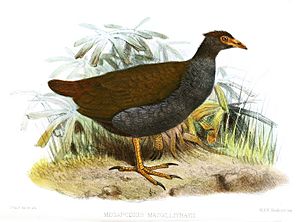 The orange-footed scrubfowl feeds on seeds, fallen fruit and terrestrial invertebrates. As with other megapodes, it nests in large mounds of sand, leaf litter and other debris where the heat generated by the decomposition of organic material serves to incubate the eggs. Construction and maintenance of the mounds, which may reach 4.5 m (15 ft) in height and 9 m (30 ft) in diameter, takes place throughout the year.

The Kunwinjku of west Arnhem Land know this bird as Kurrkurldanj.

All content from Kiddle encyclopedia articles (including the article images and facts) can be freely used under Attribution-ShareAlike license, unless stated otherwise. Cite this article:
Orange-footed scrubfowl Facts for Kids. Kiddle Encyclopedia.