The Barwon River is a perennial river of the Corangamite catchment, located in The Otways and the Bellarine Peninsula regions of the Australian state of Victoria.

Fed by the confluence of the East and West Branches of the river, the Barwon River rises in the Otway Ranges and flows generally north by east and then east, joined by thirteen tributaries including the Leigh and Moorabool rivers and flowing through Lake Connewarre, before reaching its mouth and emptying into Bass Strait at Barwon Heads. The river flows adjacent to the settlement of Winchelsea and the city of Greater Geelong. The estuarine section of the river forms part of the Port Phillip Bay (Western Shoreline) and Bellarine Peninsula Ramsar Site as a wetland of international importance, as well as of the Bellarine Wetlands Important Bird Area. From its highest point including its source confluence, the river descends 295 metres (968 ft) over its 160-kilometre (99 mi) course.

The river is crossed by a number of bridges in Geelong. Of particular note is the unusual one lane truss bridge in Newtown, Geelong. The 'Breakwater' in East Geelong was constructed by Foster Fyans to supply drinking water.

Water from the river feeds agriculture and industry. The river is a popular recreation spot for Geelong, with parklands such as Balyang Sanctuary along the banks, and sees use by water skiers and rowing regattas such as Head of the River.

The river's name is derived from the Aboriginal word Parwan, meaning "magpie" or "great wide" .

In the Australian Aboriginal Wathawurrung language the names for the river are Worragong, with no clearly defined meaning; Nellemengobeet, meaning "lagoon at mouth"; and also Barrwang, meaning "magpie". 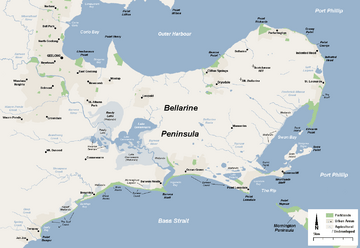 Map of the Bellarine Peninsula showing the Barwon River as it enters Bass Strait.

Towns the river flows through include: 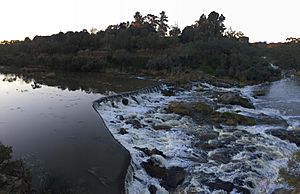 The South-Western Section of the Buckley Falls

The West Barwon Dam was constructed near Forrest in 1965 by what is now Barwon Water. The dam is now the major water supply for Geelong. 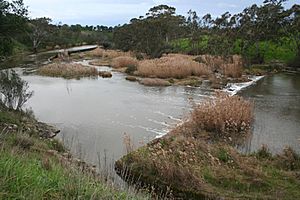 Buckley Falls is located between Highton and Fyansford. A weir and water race was built above the falls in 1876 to provide power for the Fyansford Paper Mill. The falls were named by John Helder Wedge after escaped convict William Buckley who lived in the area with Aborigines for 32 years from 1803.

The 'Breakwater' is located in the current Geelong suburb of the same name. Originally built to prevent salt water moving upstream, it now keeps the river level through Geelong constant and is an important crossing point. Construction on the weir started in late 1838 under Captain Foster Fyans and was completed by May 1840. Built by convicts, the weir failed in flood in 1844, not being fully rebuilt until 1849. Little changed to the breakwater until it was rebuilt by the Country Roads Board for modern traffic in the mid 1960s.

The Barwon River Bridge at Winchelsea was erected in 1867 for the Council of the Shire of Winchelsea, replacing an earlier timber structure of 1849. The three span arch structure was built of bluestone by James Sinclair at a cost of £4,602 and officially opened by Prince Alfred, Duke of Edinburgh, on 3 December 1867. The Barwon River Bridge is the third structure erected at this historic crossing place and has since 1867 provided an important link with Geelong and the Western District. This finely proportioned masonry arch bridge, one of the most impressive stone structures in Victoria, has a notable association with Prince Alfred, Duke of Edinburgh, the three times royal visitor to nearby 'Barwon Park' mansion. The Barwon River Bridge, which is still in regular use, has recently been rehabilitated. A new reinforced concrete structure, located beside the bluestone bridge, partly relieves the heavy traffic loads.

The Geelong Ring Road bridge carries four lanes of freeway over the river. It is made up of twin 110-metre (360 ft) long bridges, and was completed in 2009. 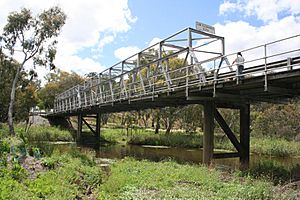 The single-lane Queens Bridge carries Queens Park Road, which links Highton and Newtown. The location was originally the site of a punt, with a wooden cattle crossing being provided in 1861. Those crossing the bridge were charged a toll. The bridge collapsed in the 1870 flood, and a new wooden bridge opened in 1872. The toll ended 1877. The bridge was wrecked by the 1909 flood, but was rebuilt. The current one-lane steel bridge was opened in 1930. A water main and footpath were added on one side in 1963, and the height and deck have been modified in later years. 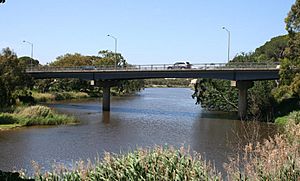 The two-lane Princes Bridge carries Shannon Avenue between Belmont and Newtown. It is the third bridge on the site, all of which have been named after Prince Albert, the consort of Queen Victoria. A bridge was first proposed for the site in the 1850s as a second Barwon crossing in Geelong. At the time many wanted the bridge to be located at end of Pakington Street, but they were defeated. The wooden Prince Albert Bridge was constructed by the City of Newtown in 1861, named after Prince Albert, who had died that year.

The bridge was originally not tolled, and provided competition for the Barwon Bridge on Moorabool Street, which was tolled by the South Barwon Shire. As a result, the shire erected a fence across new bridge to prevent people from using it, but the fence was removed several times by an unknown party, which led to a guard being stationed there. At the same time, the Newtown and Chilwell Council decided to erect its own toll gate at the new bridge, so the South Barwon council retaliated by erecting a 'check toll' gate on its side of the river. The Newtown and Chilwell councillors refused to pay the toll, which remained for another year.

With the bridge becoming dilapidated, a tender accepted in June 1888 for the construction of a replacement. Provided with separated lanes, the new wooden bridge was opened on 31 May 1889. In 1959, extensive repairs were carried out to handle much heavier traffic from the expansion of Highton. That proved to be a short-term measure, and in June 1965 the wooden bridge was replaced by current steel girder bridge, which is upstream of older bridges. To avoid flooding, the new bridge was connected to Shannon Avenue by a high level embankment, which skirts what became Balyang Sanctuary in 1973. 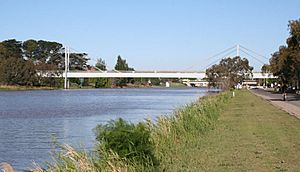 The 192-metre (630 ft) long McIntyre Bridge is located upstream of the James Harrison Bridge, and is a post-tensioned, pre-stressed stayed girder bridge, carrying a sewer pipe with a concrete pedestrian walkway above. Constructed in 1967 to carry sewage from Geelong to the ocean outfall at Black Rock, the bridge provided relief for the 1916 sewer aqueduct further downstream. It was designed by Jan van der Molen, and was one of the first in Australia to use computer engineering in the design process. 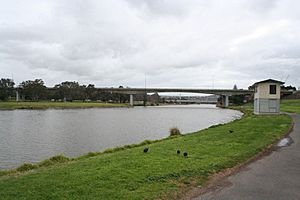 James Harrison bridge over the Barwon

The four lane James Harrison Bridge carries the Princes Highway though Geelong. Construction started in 1988 and was completed in 1990, removing heavy through traffic from the main Belmont shopping centre. Consisting of twin parallel two lane bridges, The main river span is of concrete cantilever design, with a number of smaller concrete box girder spans completing the viaduct to the south. The bridge was named after Geelong engineer and refrigeration pioneer James Harrison.

While the Barwon Bridge at Moorabool Street was being rebuilt in the mid 1920s, to allow for the extension of the tram system to Belmont, a temporary wooden bridge was provided as an alternative. It linked the end of Latrobe Terrace on the northern bank with Barrabool Road on the southern bank. 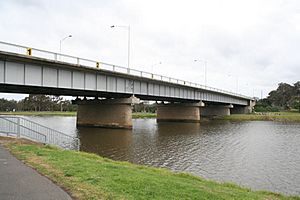 Barwon Bridge from the north bank

The four-lane Barwon Bridge carries Moorabool Street over the river, and is located on the site of the first Barwon crossing. The first wooden bridge opened early in 1848. Tolled by the South Barwon council, it was swept away in a flood four years later, on 23 May 1852. From December that year a government punt operated at the site. By late 1853, two government punts were used to form a pontoon bridge. It was not until 1859 that a proper iron bridge was opened as a replacement. That bridge was only two lanes wide and was considered too narrow to permit the extension of trams into Belmont, so it was closed and dismantled in 1924.

The new bridge was designed by Country Roads Board engineer D. V. Darwin and was opened on 18 August 1926 by Governor of Victoria, Lord Somers. Of concrete and steel girder construction, it was built by Armstrong Whitworth Pty Ltd and cost A£73,900 (A$147,800). In 1966, the bridge was widened to four lanes by extending each side of the deck. 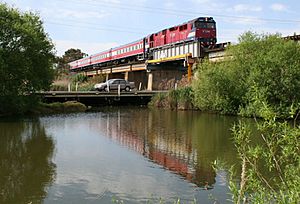 The original Breakwater Bridge was a ford running on top of the breakwater. A timber trestle railway bridge was built over the top in 1876 when the Geelong railway line was extended to Winchelsea. That bridge was replaced by a concrete and steel girder bridge in the 1960s, although the remains of the wooden supports of the former bridge are still visible.

The current low-level road causeway was built by the Country Roads Board in the mid 1960s. The causeway has a restricted 3.7-metre (12 ft) clearance underneath the railway bridge, and is only about a metre (3 ft) above the water level. As a consequence, a number of trucks became stuck under the railway bridge, and the causeway also required frequent closure due to river flooding. To overcome those problems, VicRoads received planning permission in 2009 to replace the low-level crossing with a new high-level bridge further upstream, at a cost of $63 million, with completion due by mid–2012. 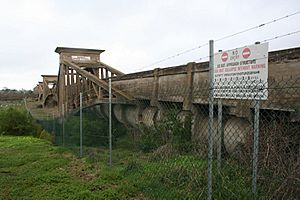 An aqueduct was constructed between 1913 and 1916 to carry sewage across the Barwon River from Geelong to an ocean outfall at Black Rock. Of reinforced concrete construction, it was an unusual design, and is listed on the Victorian National Estate Register. The designer was engineer Edward Giles Stone, who erected many daring structures using reinforced concrete. It has 14 cantilever spans, and has an overall length of more than 760 metres (2,490 ft). The viaduct was decommissioned in 1993. Because of falling debris, caused by the loss of calcium from the concrete used in the construction, the land and river underneath the aqueduct has been fenced to prevent public access. The aqueduct was replaced by a pump-boosted gravity system, including twin siphon pipes under the river.

The twin lane wooden bridge between Barwon Heads and Ocean Grove was built in 1927. Before this time a ferry ran by Tom Abernathy operated across the mount of the Barwon. The bridge was used in filming the ABC television series SeaChange. In July 2006, the Government of Victoria shelved plans to replace the heritage-listed bridge with a new one, with plans put forward for an upgraded to be carried out instead. The new Barwon Heads Bridge was constructed in 2010.

All content from Kiddle encyclopedia articles (including the article images and facts) can be freely used under Attribution-ShareAlike license, unless stated otherwise. Cite this article:
Barwon River (Victoria) Facts for Kids. Kiddle Encyclopedia.