Goodradigbee River, a perennial stream that is part of the Murrumbidgee catchment within the Murray–Darling basin, is located in the Snowy Mountains district of New South Wales, Australia. 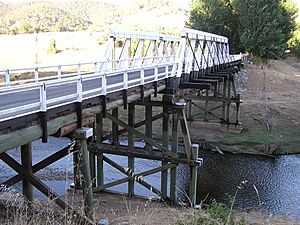 The river rises below Mount Morgan on the northern side of the Snowy Mountains at 1,650 metres (5,410 ft) and flows generally north west, joined by fifteen minor tributaries towards its mouth at the confluence with the Murrumbidgee River at Lake Burrinjuck; dropping 1,300 metres (4,300 ft) over the course of the river's length of 105 kilometres (65 mi).

The majority of the catchment (95%) is forested with the upper catchment within the Kosciuszko National Park. The catchment is 110,100 hectares (272,000 acres) in area. Some water from the upper reaches of the river is diverted into Tantangara Reservoir via an aqueduct, but otherwise the river is not dammed.

In 1968 the National Capital Development Commission considered building a dam at Brindabella Valley for the purpose of sending water into the Cotter River via a tunnel.

The bridge over the Goodradigbee at Wee Jasper was completed in 1896 and is heritage-listed as being an early example of an Allan type timber truss road bridge.

All content from Kiddle encyclopedia articles (including the article images and facts) can be freely used under Attribution-ShareAlike license, unless stated otherwise. Cite this article:
Goodradigbee River Facts for Kids. Kiddle Encyclopedia.