Burrinjuck Dam is a heritage-listed major gated concrete-walled gravity hydro-electric dam at Burrinjuck, Yass Valley Shire, New South Wales, Australia. It has three spillways across the Murrumbidgee River located in the South West Slopes region of New South Wales, Australia. The dam's purpose includes flood mitigation, hydro-power, irrigation, water supply and conservation. The impounded reservoir is called Lake Burrinjuck. It was designed by Lawrence Augustus Burton Wade (of the New South Wales Public Works Department) and built from 1907 to 1927 by Lane & Peters, Sydney. It is also known as Barren Jack Dam and Barrenjack. The property was owned by Department of Planning and Infrastructure (State Government). It was added to the New South Wales State Heritage Register on 2 April 1999.

Commenced in 1907, completed in 1928, and upgraded in 1957 and 1994, the Burrinjuck Dam is a major gated dam, located approximately 60 kilometres (37 mi) south-west of Yass. The dam was built by the New South Wales Water, Conservation & Irrigation Commission and the NSW Department of Public Works for town water supplies, river flows and domestic requirements, irrigated agriculture, industry, flood mitigation and environmental flows. The Yass and Goodradigbee rivers also flow into the dam. Together with releases from Blowering Dam, on the Tumut River, Burrinjuck Dam also provides a regulated flow of water for the Coleambally and Murrumbidgee Irrigation Areas. The dam divides the upper and lower catchment of the Murrumbidgee River and is the headwater storage for the Murrumbidgee Irrigation Area.

The pastoralist Samuel McCaughey accumulated hundreds of thousands of hectares in the Riverina after owning his first property in 1864. He had an interest in water conservation that led him to construct a series of irrigation channels and steam pumps that were critical to the rice-growing activities in the area at the turn of the century. The New South Wales government liked his ideas so much they agreed to build a larger dam. 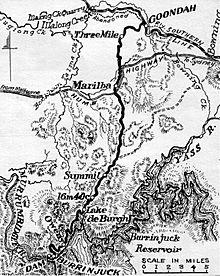 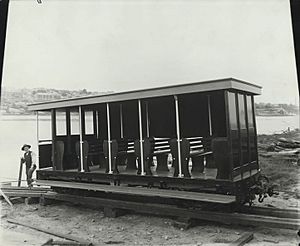 Car built for the railway

Construction commenced in 1907. Prior to about February 1911, the dam was known as Barren Jack, a corruption of the Aboriginal name of the locality. A 2 ft (610 mm) narrow gauge railway was constructed from the New South Wales Government Railways' Main Southern Line at Goondah to bring materials to the site. The railway was about 45 kilometres (28 mi) long, had a grade of 1 in 30 and some 90 foot-radius curves and took about 2 hours and 20 minutes to traverse. 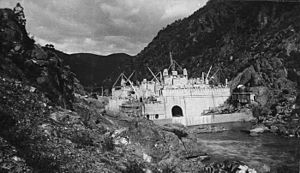 Flooding in July 1922 filled the reservoir to the record height of 1,178 feet (359 m) above sea level, or 198 feet (60 m) above the bed of the Murrumbidgee River at the dam wall. The flood waters tore through the unfinished southern spillway and fell 200 feet (61 m) to the river below, resulting in a massive fog which one journalist compared to that of Niagara Falls. The flood water came within 2 feet (0.61 m) of spilling into the finished northern spillway, which was being used as a storage site for sand and granite used in the dam's construction. Had the water entered the northern spillway, the construction materials, worth £25,000, would have been swept away.

Another major flood in May 1925 far exceeded all previously recorded floods and resulted in the dam wall being overtopped to a depth of 1 metre (3 ft 3 in).

Due to World War I, the dam was not completed until 1928. At the end of 1927, £1,712,730 had been spent on construction work, excluding the cost of the hydroelectric facilities.

In 1937, it was discovered that the dam had developed a structural weakness that required remedial action. The weakness was not due to a design flaw per se; rather it was due to strains and stresses that were not scientifically understood at the time the dam was designed. The New South Wales Government brought in dam engineering expert Professor P.G. Hornell from Sweden to report on the defects that had developed in the dam.

Apparently there were real fears of the dam wall bursting, so detailed plans were prepared for the evacuation of 20,000 people in the Murrumbidgee basin downstream of the dam in the event that the dam wall failed. The State Government played down these fears and felt that the evacuation plans would never have to be used. In the event of a catastrophic failure of the dam wall, it was anticipated that flood waters would reach Jugiong within an hour, Gundagai within 90 minutes, Wagga Wagga in six hours and Narrandera in 22 hours. Arrangements were made with police, the New South Wales Government Railways, the postal service, military and air force officials, radio stations, boat operators and local committees to be put into effect at a moments' notice.

In February 1951 a fire destroyed some of the workshops at the construction site. The compressing room, machine shop and first-aid surgery were the worst affected, and much of their contents were destroyed. The damage was estimated to cost between £50,000 and £100,000.

A major flood in 1974 eroded unweathered granite from an unlined spillway discharge channel which then resulted in the destruction of a penstock to the Burrinjuck Power Station. The outlet valves of the dam were also destroyed during the same flood. These events prompted a review of the safety of the dam which recommended a new remedial works program.

At 8 A.M. on Thursday morning of 19 October 1950, 9 men plunged to their deaths after a platform collapsed unexpectedly. The men were pulled into the spillway. They were pulling wires to open the southern spillway in order to alleviate floodwaters when the platform they were working from collapsed. 8 out of 9 of the men's bodies were found. Mr. Frank Lloyd Barton's body was found a mile down the river from the dam. The other 8 men were Frederick Rule, Frederick Basham, James Chant, James Fillery, Robert Elliott, Reginald Lippiatt, Peter Steinmanis, and Eugene Podusteanu. There was a 10th man, Bruce Grieves, working as well but he survived the accident because he had one leg off the platform and managed to pull back when the platform gave way.

In response to the 1974 floods, the Burrinjuck Dam Flood Security Upgrading project was undertaken to raise the existing dam wall by 12 metres (39 ft) to its present height of 92 metres (302 ft) and to install post-tensioned ground anchor cables to improve the security of the dam during major floods. At the time, the project was unprecedented in two respects:

Owing to the windward position of Burrinjuck astride the western slopes of the Brindabella Range, maximum temperatures are significantly cooler relative to altitude than regions on the eastern side of the range—i.e. the Australian Capital Territory; this difference in maxima is most pronounced in winter, jointly with much higher winter precipitation. Snow falls occasionally at the bottom of the valley, but it regularly occurs on the surrounding ranges and farmland above 800 metres (2,600 ft) (such as at Wee Jasper); nearby Black Andrew Mountain (935 metres) and Mount Barren Jack (972 metres) overlooking the lake, are periodically snow-capped from June to August. 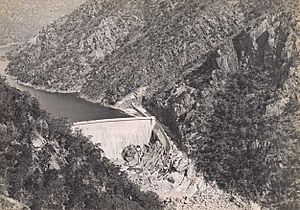 Burrinjuck Dam is situated on the Murrumbidgee River 60 km by road from Yass in southern New South Wales. The dam is part of a larger system of weirs and controls which include that of Blowering Dam and Berembed Weir. Burrinjuck Dam provides water supplies for the Murrumbidgee Irrigation Area which has a combination of licensed agricultural, irrigation and stock use, with also town and domestic users. Apart from acting in a regulatory role the dam can also pass water through its 10 megawatt hydro-electric power station thus becoming a very fast and clean supply of electricity.

Linked to the dam is a pump house, left and right spillways and a hydro electric power generation system. 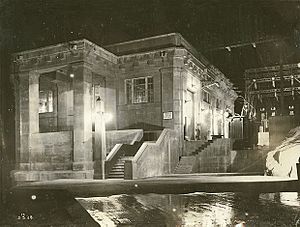 The dam houses a hydroelectric power station and has three operational turbine generators, with a generating capacity of 28 MW of electricity; with a net generation of 24.5 gigawatt-hours (88 TJ) per annum.

The unnaturally cold water released from the dam, up to 10 °C (50 °F) colder than it naturally should be, is believed to have directly contributed to the disappearance of the freshwater catfish from the Murrumbidgee between Burrinjuck and Wagga Wagga.

The dam is an example of how applied modern technology has been used to meet the demand of an expanding rural area. The dam was part of a larger system of weirs and controls providing water for the government-sponsored Murrumbidgee Irrigation Scheme which enabled agriculture to expand in the area. It is the first major water storage built specially for irrigation purposes in NSW. The dam is also part of the New South Wales's first hydro-electric scheme.

It is listed as a National Engineering Landmark by Engineers Australia as part of the Engineering Heritage Recognition Program.

All content from Kiddle encyclopedia articles (including the article images and facts) can be freely used under Attribution-ShareAlike license, unless stated otherwise. Cite this article:
Burrinjuck Dam Facts for Kids. Kiddle Encyclopedia.