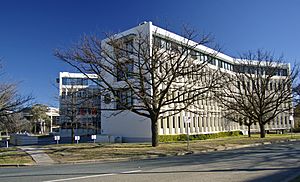 Engineering House which is the national office for Engineers Australia in Barton, Australian Capital Territory.

The Institution of Engineers Australia, often shortened to IEAust and/or trading as Engineers Australia (EA), is a professional body and not-for-profit organisation dedicated to being the national forum for the advancement of the engineering field within Australia and a member of Washington Accord. As of 2013, it has over 100,000 members in nine geographic Divisions from all engineering disciplines, including 41,000 Students, 4,400 Engineering Technologists and Engineering Associates, 55,600 Professional Engineers. The members all belong to one or more of nine Colleges covering the different fields of engineering practice. 20,000 members are Chartered Engineers.

The organisation began after World War I, following recognition of the need for a single body to represent engineers, rather than the numerous smaller organisations that existed then. The first council meeting was held in 1919, electing Professor William Warren of the University of Sydney as the first President. On 1 May 1926 the Institution was incorporated as a company limited by guarantee and on 10 March 1938 His Majesty King George the Sixth granted a charter of incorporation to the Institution reconstituting it as a body corporate and politic by Royal Charter.

The National Congress is a representative body of some 50 members, which elects and monitors the Council of Engineers Australia. The responsibilities and structure of National Congress are determined by the Royal Charter and By-laws. The Council is Engineers Australia's governing body. It has nine members and its role is comparable to that of a company board. It appoints and liaises with the Chief Executive, sets regulations and policies, sets strategic directions, and monitors the organisation's financial sustainability and performance. Each of Engineers Australia's nine divisions is led by a division committee of the division members. A division committee is responsible to and under the direction of the Council. A division group delivers specific services to the members of the Division, within a specific field of practice, area of interest or geographic area. Each of Engineers Australia's eight colleges is led by a College Board of the college members. College Boards are under the direction of the Council.

The patron of Engineers Australia is the Governor-General of Australia, Sir Peter Cosgrove AK MC (Retd).

Engineers Australia engages political lobbyists to represent its interests. In South Australia, it is represented by MCM Strategic Communications.

Engineers Australia is the designated assessing authority for engineering occupations as listed by the Department of Immigration and Border Protection.

There is no formal system of regulation for engineers throughout Australia. Engineering services are regulated under a variety of Acts in ad hoc areas, many of which relate to engineers in the building and construction industry. There are also many pieces of subordinate legislation, such as regulations, by-laws and orders-in-council that impose various prescriptive standards and incur unnecessary costs to the engineering industry in complying.

Queensland is currently the only Australian jurisdiction to apply a comprehensive registration system for engineers. The Queensland Minister for Public Works and Information and Communication Technology appointed Engineers Australia on 1 July 2008 as one of the Approved Assessment entities for assessing applicants for Registration with the Board of Professional Engineers of Queensland.

The National Engineering Register (NER) has been created by Engineers Australia to provide a means of presenting registered engineers and their services to the public. It also provides assurance to consumers that engineers engaged from the NER meet the high standards of professionalism expected in the engineering profession. It is the largest Engineering Register in the country delivering a uniform national benchmark standard of professionalism in the broadest areas of engineering practice, both general and special.

The NER will be a publicly searchable database providing a national system of ‘registration’ for the engineering profession in Australia of professional engineers, engineering technologists and engineering associates in both the private and public sectors. It is expected that the NER will facilitate access to existing State/Territory registers and to new registers, as and when they are developed.The NER is aimed at removing any current inconsistencies across State/Territory jurisdictions.

The NER will cater for nine (9) general and ten (10) special areas of practice aligned to demonstrated professional competence and experience. Registration on the 10 special areas of practice will be restricted to Chartered members of Engineers Australia and registrants who have successfully completed Engineers Australia's Chartered assessment process.

Registrants on the NER will be able to confirm the following eligibility criteria. the remaining

NER registered Chartered members of Engineers Australia in the occupational category of professional engineer with 7 + years of relevant engineering industry experience in their area(s) of practice since graduation and who have spent at least two years in responsible charge of engineering work will also be eligible to apply to join the APEC Engineers Register and the International Professional Engineers Register (IPEA) for non APEC economies. Chartered members assessed as eligible will be entitled to also use the postnominal APEC Engineer and/or IntPE(Aus).

The Council expects Chartered Members and Registrants to maintain records of continuing Professional Development (CPD) activities that extend or update their knowledge, skill or judgment in their area or areas of engineering practice. An individual’s CPD records must demonstrate a minimum of 150 hours of structured CPD in the last three years. To maintain Chartered Status, registrants must complete Continuing Professional Development (CPD), which is subject to review every five years.

Since its inception, Engineers Australia has had a Code of Ethics and disciplinary processes that enable it to take action against members who breach that Code. The membership by-laws requires the professional regulation of members.

Chartered members and registrants on the various registers administered by the National Engineering Registration Board are specifically required to practice in accordance with the Code of Ethics.

Engineers Australia believes that sustainable development is development that meets the needs of the present without compromising the ability of future generations to meet their own needs.

The current categories are:

All content from Kiddle encyclopedia articles (including the article images and facts) can be freely used under Attribution-ShareAlike license, unless stated otherwise. Cite this article:
Engineers Australia Facts for Kids. Kiddle Encyclopedia.