Burrinjuck is a village community in the far eastern part of the Riverina. It is situated by road, about 15 kilometres southwest from Woolgarlo and 28 kilometres south from Bookham. The name of the town is derived from an Aboriginal word meaning 'mountain with a rugged top'. At the 2016 census, the Burrinjuck area had a population of 19.

The village is situated on the western side of Burrinjuck Dam which holds water from the Murrumbidgee River and which was constructed between 1907 and 1928 (with World War I interfering with the timing of the construction).

During the construction of the dam and in the time during which it filled, there was a settlement known as 'Barren Jack City' facing the river at the base of the Burrinjuck mountain. Much of its site was later submerged as the dam water rose.

The locality of Burrinjuck includes part of one of the proposed sites for Australia's national capital, which was known as Mahkoolma. It was to be located in the upper reaches of nearby Carrolls Creek, 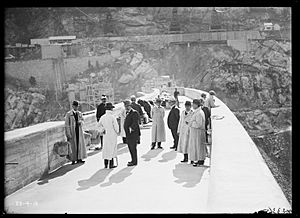 Visit of State Governors to Burrinjuck Dam in 1915

All content from Kiddle encyclopedia articles (including the article images and facts) can be freely used under Attribution-ShareAlike license, unless stated otherwise. Cite this article:
Burrinjuck, New South Wales Facts for Kids. Kiddle Encyclopedia.