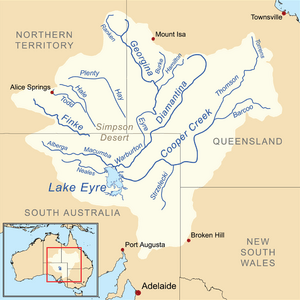 The Diamantina River is in Central West Queensland, Australia. The river was named by William Landsborough in 1866. He named the river after Lady Diamantina Bowen (née Roma). She was the wife of Sir George Ferguson Bowen. He was the first Governor of Queensland. The river has three major tributaries. They are the Western River, the Mayne River, and Farrars Creek.

All content from Kiddle encyclopedia articles (including the article images and facts) can be freely used under Attribution-ShareAlike license, unless stated otherwise. Cite this article:
Diamantina River Facts for Kids. Kiddle Encyclopedia.