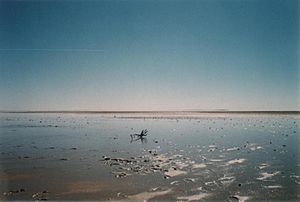 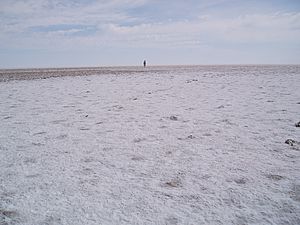 Lake Eyre is in the driest desert region of central Australia. It is a large endorheic lake system, which means that the water flows in, but does not flow out. As the water evaporates, the lake dries up leaving a dry salt lake. The lake does not usually completely dry up, there is often water in small areas on the lake surface. The rate that the water dries up is 2.5 m (98 in) per year, that is about 20 times more than the rainfall in the area.

When Lake Eyre is full, the water is almost fresh and native fresh water fish can live in it. The lake becomes saltier as the 450 mm (18 in) salt crust dissolves over six months. This kills millions of fish. When about 4m deep the Lake is as salty as the sea. It becomes more salty as the water evaporates. At about 500mm depth the Lake becomes a "pink" color because of a beta-carotene pigment made by the algae Dunaliella salina.

Beaches made by wave action suggest that during the Medieval Warm Period Lake Eyre possibly held permanent water at levels above those of 1974.

The local Aboriginal people, the Arabunna people, have stories that explain the creation of Lake Eyre. These stories are part of their sacred traditions, and are only told to initiated people.

When there is water more than 8 million birds, from more than 60 different species, flock to the lake. The pelicans are usually the first to arrive, followed by silver gulls, hoary headed grebes, Australasian grebes, cormorants, ducks, banded stilts, kites, falcons and wedge tailed eagles. Scientists still do not know how the birds know when the lake holds water.

There is also a lizard, the Lake Eyre Dragon, Ctenophorus maculosus, that lives in the cool mud below the salt crust of the lake. 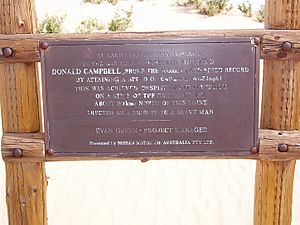 The salt crust on the lake is not thick and can break like glass under a person's weight. At Level Post Bay, the crust is more than one metre thick, and because of its flat surface it has been the site for various land speed record attempts. In 1964, British driver, Sir Donald Campbell, set a new record of 664 km/h (413 mph), in the Bluebird-Proteus CN7.

All content from Kiddle encyclopedia articles (including the article images and facts) can be freely used under Attribution-ShareAlike license, unless stated otherwise. Cite this article:
Lake Eyre Facts for Kids. Kiddle Encyclopedia.