The Donnelly River is a river in the South West of Western Australia. Its main tributaries are Barlee Brook and Carey Brook. The river runs primarily through state forest reserves, although 25 private landholdings are situated along the length of the river. Clearing of the catchment area is estimated at 20% with the land mostly being used for viticulture, horticulture, dairy, grazing and tourism.

The first European to sight the river was Lieutenant William Preston in 1831. The river was named by James Stirling, the Governor of Western Australia, in the 1830s after Admiral Sir Ross Donnelly, a friend of Stirling's father-in-law James Mangles MP. Bannister had stood in for Mangles at Stirling's wedding to Ellen Mangles.

Several species have been introduced into the river, including eastern mosquitofish (Gambusia holbrooki), European perch (Perca fluviatilis), and rainbow trout (Oncorhynchus mykiss). The latter is the most common, being specifically introduced for angling purposes, with over 500,000 being stocked into the system between 1999 and 2004. 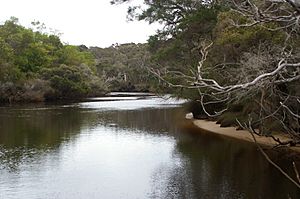 All content from Kiddle encyclopedia articles (including the article images and facts) can be freely used under Attribution-ShareAlike license, unless stated otherwise. Cite this article:
Donnelly River (Western Australia) Facts for Kids. Kiddle Encyclopedia.