The flathead grey mullet (Mugil cephalus) is an important food fish species in the mullet family Mugilidae. It is found in coastal tropical and subtropical waters worldwide. Its length is typically 30 to 75 centimetres (12 to 30 in). It is known with numerous English names, including the flathead mullet, striped mullet (US, American Fisheries Society name), black mullet, bully mullet, common mullet, grey mullet, sea mullet and mullet, among others.

The flathead grey mullet is a mainly diurnal coastal species that often enters estuaries and rivers. It usually schools over sand or mud bottoms, feeding on zooplankton. The adult fish normally feed on algae in fresh water. The species is euryhaline, meaning that the fish can acclimate to different levels of salinity.

The back of the fish is olive-green, sides are silvery and shade to white towards the belly. The fish may have six to seven distinctive lateral horizontal stripes. Lips are thin. The mullet has no lateral line. A common length is about 50 centimetres (20 in), and its maximum length is 100 centimetres (39 in). It can reach a maximum weight of eight kilograms (18 lb).

The flathead mullet is cosmopolitan in coastal waters of the tropical, subtropical and temperate zones of all seas, as far north as the Bay of Biscay and Nova Scotia in the Atlantic Ocean. It occupies fresh, brackish and marine habitats in depths ranging between 0–120 metres (0–394 ft) and with temperatures between 8–24 °C (46–75 °F).

In Australia, the fish is widespread, from Far North Queensland, around southern Australia to the Kimberley region of Western Australia. They also occur in the Bass Strait area of Tasmania. They live in tropical and temperate coastal marine and estuarine waters, but are also often found in the lower reaches of rivers. They are able to live in a wide range of salinity and so may also be found in lagoons, lakes and far into estuaries, but migrate back to the sea to spawn.

In the Colorado River mullet are pelagic in larger pools, sometimes moving into currents below dams, and generally occurring in small groups. The mullet populations are currently declining in Arizona, due to periods when the Colorado River does not reach the Gulf of California.

The flathead grey mullet is an important food fish around the world, and it is both fished and farmed. The reported worldwide catches from fishing in 2012 were about 130,000 tonnes and aquaculture production was 142,000 tonnes. 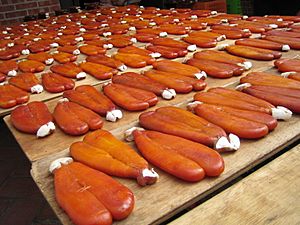 On the coast of Northwest Florida and Alabama, this mullet, called the striped or black mullet, is often a specialty of seafood restaurants. Fried mullet is most popular, but smoked, baked, and canned mullet are also eaten. Local fishermen usually catch mullet in a castnet, though most use a land based seine net. Mullet is a delicacy in this area and is most often consumed in the home. Mullet are usually filleted, and the remaining frames used for fish stock, used in chowders and stews. The mullet most commonly consumed in Florida however is the white mullet (Mugil curema), because its preference for cleaner water gives it a cleaner and less muddy taste.

All content from Kiddle encyclopedia articles (including the article images and facts) can be freely used under Attribution-ShareAlike license, unless stated otherwise. Cite this article:
Flathead grey mullet Facts for Kids. Kiddle Encyclopedia.