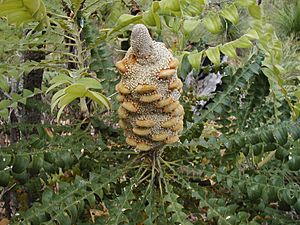 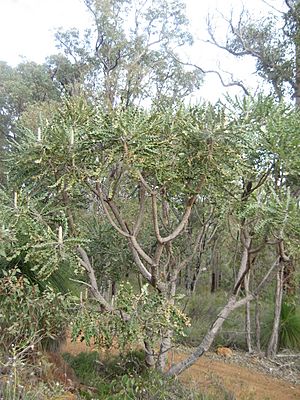 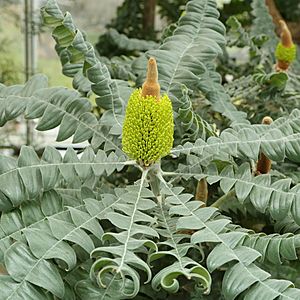 Banksia grandis, commonly known as bull banksia or giant banksia, is a species of common and distinctive tree in the south-west of Western Australia. The Noongar peoples know the tree as beera, biara, boongura, gwangia, pira or peera. It has a fire-resistant main stem with thick bark, pinnatisect leaves with triangular side-lobes, pale yellow flowers and elliptical follicles in a large cone.

Banksia grandis was first formally described in 1798 by Carl Ludwig Willdenow in the fourth edition of the book Species Plantarum. The specific epithet (grandis) is a Latin word meaning "great", "large" or "tall".

Banksia grandis is a member of Banksia series Grandes, a series containing only B. grandis and the closely related species B. solandri.

Bull banksia grows in woodland and heath on the coastal plain between Mount Lesueur and Cape Leeuwin, east to Cape Riche and inland to Woodanilling. It is common in the jarrah forest on the Darling Range.

Species of nectarivorous birds that have been observed feeding on B. grandis include Anthochaera carunculata (red wattlebird). Purpureicephalus spurius (red-capped parrot) has also been recorded feeding upon the seed, as have black cockatoos, though it is not clear which species of black cockatoo was observed, Calyptorhynchus baudinii (Baudin's black cockatoo) or C. latirostris (Carnaby's black cockatoo).

Bull banksia is not often cultivated and is slow-growing, taking ten years or more to flower from seed. It is very sensitive to dieback and is difficult to grow in regions of summer humidity. It requires a well-drained sandy soil. Seeds do not require any treatment, and take 22 to 42 days to germinate.

Use by Indigenous people

The flowers of Banksia grandis were known as mangyt, pulgarla or Bool gal la by the Indigenous peoples who live within its range. The flowers were steeped in water or sucked to obtain nectar.

All content from Kiddle encyclopedia articles (including the article images and facts) can be freely used under Attribution-ShareAlike license, unless stated otherwise. Cite this article:
Bull banksia Facts for Kids. Kiddle Encyclopedia.