Cape Leeuwin is the most south-westerly mainland point of the Australian continent, in the state of Western Australia.

A few small islands and rocks, the St Alouarn Islands, extend further in Flinders Bay to the east of the cape. The nearest settlement, north of the cape, is Augusta. South-east of Cape Leeuwin, the coast of Western Australia goes much further south. Located on headland of the cape is the Cape Leeuwin Lighthouse and the buildings that were used by the lighthouse keepers.

Cape Leeuwin is often grouped with the next headland north, Cape Naturaliste, to identify the geography and ecology of the region. One example is in the name Leeuwin-Naturaliste National Park. Another is in the use of the phrases Cape to Cape or the Capes in tourist promotional materials. A shore base and a ship of the Royal Australian Navy have been named HMAS Leeuwin after the cape.

The Wardandi Aboriginals were the first peoples in the area. They called it "Doogalup".

The English navigator Matthew Flinders named Cape Leeuwin after the first known ship to have visited the area, the Leeuwin ("Lioness"), a Dutch vessel that charted some of the nearby coastline in 1622. The log of the Leeuwin has been lost, so very little is known of the voyage. However, the land found by the Leeuwin was recorded on a 1627 map by Hessel Gerritsz: Caert van't Landt van d'Eendracht ("Chart of the Land of Eendracht"), which appears to show the coast between present-day Hamelin Bay and Point D’Entrecasteaux. Cape Leeuwin itself cannot be recognised.

Other European vessels passed by for the next two centuries, including the Dutch 't Gulden Zeepaert, commanded by François Thijssen, in 1627 and the French Gros Ventre, under Louis Aleno de St Aloüarn, in 1772.

The first known European sighting of the cape was by Bruni d'Entrecasteaux in 1791. d'Entrecasteaux thought the cape was an island, and named it "Isle St Allouarn" ("St Allouarn Island"), in honour of Captain de St Aloüarn. Ten years later, Matthew Flinders began his survey of the South coast of New Holland from Cape Leeuwin in 1801 when he named it. Flinders landed in the bay to the east of Cape Leeuwin, today's Flinders Bay. Flinders was aware that the area had been known to the Dutch as "Leeuwin's Land".

At two in the morning we had 80 fathoms, and veered towards the land. It was seen from the masthead at five; and the highest part, the same which had been set in the evening, bore N. 12° W. This is the largest of the before-mentioned Isles of St Alouarn; but at half past seven we saw hills extending from behind, and, to all appearance, joining it to the mainland. This supposed isle is, therefore, what I denominate "Cape Leeuwin", as being the south-western and most projecting part of Leeuwin's Land.[3]

The St Alouarn Islands is a group of islands off the tip of Cape Leeuwin. 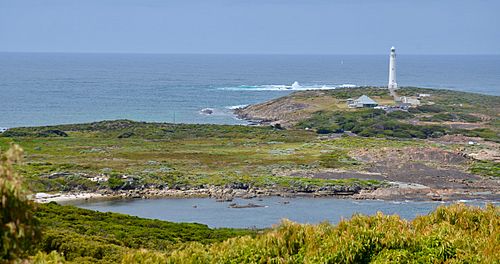 Cape Leeuwin area. Lighthouse and cottages upper right, with cars parked at the lighthouse carpark. The waves breaking are at the furthest end of the land behind the lighthouse. The road to Augusta is hidden by vegetation. The swamp and spring that supply the water wheel in mid ground. The day photograph was taken both sides were calm, a yacht might be seen just left of the lighthouse in the distance.

The hillside to the west of the lighthouse, and the land nearby is now part of Leeuwin-Naturaliste National Park. It has extensive heath vegetation and thick scrub which supports a very high number of plant species and also bird species that utilise this habitat. The bay just east of Cape Leeuwin is Flinders Bay, named after Matthew Flinders, the circumnavigating explorer of the early 19th century.

Shipwrecks within sight of this location include SS Pericles, an iron-screw steamer built in Belfast in Northern Ireland, which sank after hitting an uncharted rock on a clear calm day in 1910.

Some shipwrecks are identified as being within the vicinity of Augusta, Cape Leeuwin or Hamelin Bay that might not be within visual distance of the lighthouse.

Cape Leeuwin is mentioned in the poem associated with the children's story The Sing-Song of Old Man Kangaroo by Rudyard Kipling. The poem is also the best way for outsiders to learn the cape's correct pronunciation; to rhyme with "flew in".

Cottages from the east, Cape Leeuwin

All content from Kiddle encyclopedia articles (including the article images and facts) can be freely used under Attribution-ShareAlike license, unless stated otherwise. Cite this article:
Cape Leeuwin Facts for Kids. Kiddle Encyclopedia.