St Alouarn Islands are a group of islands and rocks south-east of Cape Leeuwin in Western Australia, approximately 11 km south of Augusta in Flinders Bay.

In 1772 Louis de St Alouarn in the Le Gros Ventre was in the region as part of the expedition of Kerguelen, and subsequently the islands were named in 1792, after Captain de St Alouarn, by French navigator Antoine d'Entrecasteaux.

The Point Matthew lookout on the road between Augusta and Cape Leeuwin, that has the islands identified in a brass compass plate that also identifies distances. 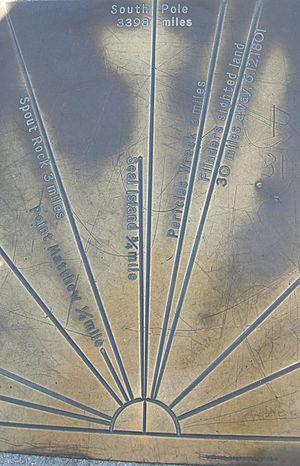 There are a number of wrecks in the vicinity of Cape Leeuwin.

The best-known wreck near the islands was that of the Aberdeen White Star ship SS Pericles on an uncharted rock on 13 March 1910, within sight of the Cape Leeuwin lighthouse in daylight hours.

Whale watching boats leaving from Augusta Port tend not to venture into this group of islands and rocks, but travel around Flinders Bay to the east of the islands.

The islands are significant for their bird colonies - with Seal Island and St Alouarn Island being reserves for that purpose.

The named islands, in order of distance from mainland are:

(also identified by some sources as Flinders Island

Named Island in Admiralty Chart 1037 of 1878
Vested as 'Flinders Island and various rocks south of Augusta' as 'A' reserve in 1986. 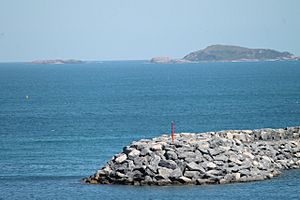 Flinders is on left side at rear

There are a few named rocks in the group

Unnamed rocks run parallel to the line of named islands above, between Cape Leeuwin and South-West Breaker, with one exception - Spout Rock, west of Flinders Islet.

In 2009, the gazettal of the Augusta Port Area delineated the port in reference to the northernmost point (at High water level) on Saint Alouarn Island (with truncated spelling), as well as Seal Island, and Point Matthew.

In 2013 - 2013, the Western Australian government, through the Royalties for Regions programme, constructed a new harbour outside of the Hardy Inlet area of the Blackwood River mouth.

The port is to the south, and within view of Flinders Bay settlement and boat ramp. It is located adjacent to the road that goes to Cape Leeuwin lighthouse.

Oceangoing vessels had previously anchored in Flinders Bay, or used the Flinders Bay jetty; however, its short-term operation between the 1890s and 1930s subsequently left the bay with no port facility.

All content from Kiddle encyclopedia articles (including the article images and facts) can be freely used under Attribution-ShareAlike license, unless stated otherwise. Cite this article:
St Alouarn Islands Facts for Kids. Kiddle Encyclopedia.