Flinders Bay is a bay and locality that is immediately south of the townsite of Augusta, and close to the mouth of the Blackwood River.

The locality and bay lies to the north east of Cape Leeuwin which is the most south-westerly mainland point of the Australian Continent, in the state of Western Australia. 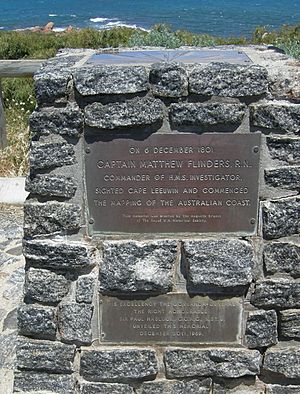 Plaque at Point Matthew lookout on road to Cape Leeuwin

On Matthew Flinders Terra Australis Sheet 1 1801-1803 the area was originally known as Dangerous Bight. The bay runs from Point Matthew 1.5 km East North East of Cape Leeuwin to Ledge Point some 8 km east. It was named by either James Stirling or Septimus Roe in 1829 or 1830. Matthew Flinders was first in the Bay on 7 December 1801.

The name of the locality of Flinders Bay is tied to the small settlement that had been a whaling and fishing location, as well as the terminus of the Busselton to Flinders Bay Branch Railway railway line (1920s, closed 1957), and the earlier Flinders Bay jetty (1890s). The settlement was in the earlier days considered to be separate from Augusta but now is more or less the southern portion of the larger community.

The need for safe, and efficient transfer of whale watchers, and a safe mooring location in the Bay for fishermen has seen a proposal for a marina in 2004 which had included plans for the marina close to the old settlement of Flinders Bay. The 2005 revised proposal has moved to a bay further around towards Cape Leeuwin. The Flat Rock site is completed and has been called 'Augusta Boat Harbour' by the department of Transport

The St Alouarn Islands stretch out south of Point Matthew (on the road to Cape Leeuwin), and are effective barriers along with reefs for the outer reaches of the bay to the south.

Like the majority of the southwestern coastal regions of Western Australia, Flinders Bay experiences a cool-summer Mediterranean climate with cool to warm summers and mild, wet winters.

After trials in 2012, a world-first commercial "sea ranch" was set up in the Bay, to raise abalone. The ranch is based on an artificial reef made up of 5000 (as of April 2016[update]) separate concrete units called abitats (abalone habitats). The 900-kilogram (2,000 lb) abitats can host 400 abalone each. The reef is seeded with young abalone from an onshore hatchery.

The abalone feed on seaweed that has grown naturally on the abitats. The ecosystem enrichment of the bay also results in growing numbers of dhufish, pink snapper, wrasse, samson fish and other species.

Brad Adams, from the company, has emphasised the similarity to wild abalone and the difference from shore based aquaculture. "We're not aquaculture, we're ranching, because once they're in the water they look after themselves."

All content from Kiddle encyclopedia articles (including the article images and facts) can be freely used under Attribution-ShareAlike license, unless stated otherwise. Cite this article:
Flinders Bay Facts for Kids. Kiddle Encyclopedia.