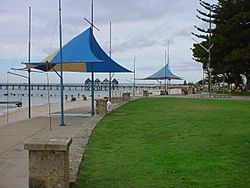 The early history of European exploration of the Busselton area focuses on the French expedition of 1801 which brought Nicholas Baudin, with his ships the Géographe and Naturaliste, to the coast of Western Australia. Baudin named Geographe Bay and Cape Naturaliste after his vessels, and named the river Vasse after a sailor, Thomas Vasse, who was lost as he went overboard and believed to have drowned.

Busselton was one of the earliest settlements in Western Australia. It was first settled by the Bussell family, who relocated there from their location on the Blackwood River after John Garrett Bussell discovered superior farm land in the area. The Bussells moved to the area in 1834, establishing a cattle station which they named Cattle Chosen. Cattle Chosen quickly became one of the most prosperous stations in the colony, and as a result nearly all of the settlers at Augusta relocated to the area within a few years. A number of settlers established themselves at Wonnerup, and eventually a contingent of troops were stationed there under Lieutenant Henry Bunbury. It was originally intended to locate the townsite at Wonnerup, but the area was low-lying and marshy, and Bunbury considered it unsuitable for a townsite. The present area was then recommended by the Surveyor General, John Septimus Roe. 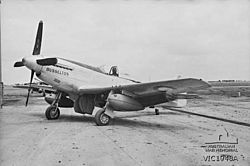 The present name of Busselton derives from the Bussell family. It was first officially used in June 1835. The Bussells, who were not consulted about the name, preferred the name Capel after a relative in England, Capel Carter, but the name Busselton was retained. A town named Capel was later established to the north of Busselton.

Being in close proximity to the tall timber country, Busselton soon established itself as a leading port. In 1850, timber was being exported and the small town prospered. Jetties for this purpose were built at Wonnerup, Busselton and Quindalup. Of these, only the Busselton Jetty remains.

Western Australia's first railway line was built just north of Busselton at Lockville in 1871, the original engine known as the Ballarat engine is on display near the tourist bureau. The privately owned line was used for the transport of timber to the Wonnerup jetty across the Ballarat bridge which was later converted to a pedestrian bridge and removed in 2004 to allow for the replacement of the nearby Vasse Floodgates.

From about 1927 to 1957, Busselton was also on the WAGR railway line running from Bunbury to Flinders Bay.

Following the closure in the 1950s of the Flinders Bay branch, most of the old line formation was changed in ownership. The railway line also connected onto the Busselton Jetty and was not closed on the jetty until the 1970s.

The connection with Bunbury was closed in the late 1980s.

Virgin Australia Regional Airlines (formerly Skywest) has provided (in the past) a weekend service to Busselton from Perth with flights being 45 minutes in duration. There were three return flights a week using Fokker 50 aircraft.

Busselton experiences a Mediterranean climate (Köppen climate classification Csa/Csb). Residents and visitors enjoy moderate temperatures, with an average maximum temperature of 22 °C and a minimum of 11 °C. The summers are generally hot, with an average daily maximum of 28 °C (82.4 °F) with cooling afternoon sea breezes, and a winter that delivers cooler temperatures; 8 to 18 °C (46.4 to 64.4 °F) and rain that supports diverse agricultural industries, including a world-famous grape-growing region. The annual average rainfall for Busselton is 864 mm, with the wettest period being from May to September.

According to the Australian Bureau of Statistics the Shire had a permanent resident population of 25,950 in 2004 with the town of Busselton accounting for 67% or 17,400 of the total. The Shire's permanent population is expected to continue to increase significantly to approximately 34,000 in 2011 and 46,000 in 2021. According to the Australian Bureau of statistics during the year 2004/2005 Busselton's growth rate for the 12-month period was 6.5%, bringing 1700 new residents to the shire and increasing the population to an estimated 27,546. In 2012, Busselton gained city status.

Busselton's growth over the past decade has been centred along the shores of Geographe Bay; this has created a narrow urban strip 15 km long and around 1 km wide. The heavy coastal development has led to a shortage of beachside blocks. 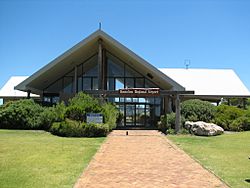 The only tertiary institution in the area is the South Regional TAFE.

A new hospital has been announced by the State Government, with completion expected in 2014. Facilities of the new hospital will include 64 overnight and 20 same-day beds, a new renal unit, two operating and an expansion of the Emergency Department.

Events are held year round in Busselton. The most notable being:

There are only Christian places of worship in Busselton. These include:

Although properly Busselton is the only city in its local government area (The Shire of Busselton), other important townships include Dunsborough, Yallingup, and Vasse.

The nearest city to Busselton is Bunbury, which is 53 km away.

All content from Kiddle encyclopedia articles (including the article images and facts) can be freely used under Attribution-ShareAlike license, unless stated otherwise. Cite this article:
Busselton Facts for Kids. Kiddle Encyclopedia.