Wonnerup House is a heritage-listed farm precinct in Wonnerup, Western Australia. The current house was built in 1859 by George Layman Jr., one year after the original house built in 1837 by his father, George Layman Sr., was destroyed by fire. The dairy and kitchen survived the fire because they were separate from the house. Stables and a blacksmith workshop were later additions to the farm. In the 1870s, when the lack of a school in Wonnerup was an issue for the local residents, George Layman Jr. donated land near Wonnerup House for a school, which was built in 1873. In 1885 a teacher's house was constructed. The precinct was purchased by the National Trust of Australia in 1971 and opened to the public in 1973. 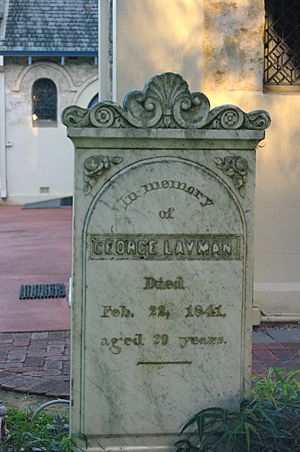 In 1827 George Layman, then 17 years old, immigrated to Australia from England and settled in Van Diemen's Land, Tasmania, with his brother Charles. Van Diemen's Land was initially a penal colony, but became a colony in its own right in 1824. In 1829, Layman was attacked and robbed of all his money by escaped convicts, and decided to work his passage to the new Swan River Colony, arriving in October 1829. He married Mary Ann Bayliss in Perth in 1832; the couple established a homestead in Augusta. However, Augusta failed as a settlement, and many of the settlers chose to exchange their grants there for land in the Vasse region.

George and Mary Layman moved to Vasse in 1834 with their two young daughters, Harriet and Mary. Their son George Jr. was born in 1837, the same year that George built a homestead on his land. This cottage was followed by a separate dairy and kitchen complete with cellar and large ovens. The Laymans had two other children, Charles in 1838 and Catherine (Kate) in 1841.

Relations between the European settlers and the native Wardandi people were strained to the point of violence, resulting in several Aboriginal deaths. In February 1841, after a long days work at the Layman property, George Layman was speared to death by Wardandi elder Gaywal. According to several witnesses including Robert Heppingstone, Layman had gotten involved in an argument between Gaywal and another Wardandi tribesman Milligan over the stealing of Milligan's allocation of damper by Gaywal. Layman pulled Gaywal's beard, which was considered a grave insult. A manhunt for Layman's killer went on for several weeks, involving much bloodshed as Captain Molloy, the Bussell brothers, and troops killed an unknown number of Aboriginals. One source has described these events which later became known as the Wonnerup massacre; however, no government records were written to describe the event. The posse eventually shot Gaywal and captured his three sons, two of whom were imprisoned on Rottnest Island.

A year after George's death, Mary married Robert Heppingstone. They had two children, Arthur and Robert. Heppingstone owned a whaling operation that operated from Castle Rock, in addition to running the Wonnerup farm. On 6 September 1858, the whaling boat Champion with Heppingstone at the tiller was ferrying goods in rough seas from the Castle Bay whaling station to a boat offshore. While turning, it was hit by a wave that threw Heppingstone across the boat, and before he could recover, a second wave hit, upending the boat. Three crewmen were rescued, but Heppingstone drowned in the accident.

Earlier that same year, in February 1858, the Layman cottage burned to the ground; only the dairy and kitchen in the separate building escaped the flames.

At this stage, 20-year-old George Layman Jr. took over the management of the farm and the whaling operation. In July 1859 George married Amelia Harriet Curtis and started building a new house, the current Wonnerup House, for his family using local limestone and timbers. The wooden roof shingles were later covered with a corrugated iron.

The house was built in stages, with four rooms and a hall at the outset and a kitchen and scullery added around 1862. In 1925 a bathroom and toilet were introduced. Expansion of the kitchen and dairy which survived the fire was completed in 1872. In the 1880s and 1890s, Wonnerup House was one of the district's most lucrative dairy farms.

The main gates were cast-iron-mounted onto limestone columns. These gates were erected to the memory of George Layman Sr. A tablet set into the columns reads: "George Layman came to Western Australia in 1829 aged 18 years, Augusta 1830, Wonnerup 1834, speared by natives 1841".

One of the bedrooms with furniture that belonged to the Layman family.

The land on which Wonnerup House stands was originally surveyed as Sussex lot 4, which George Layman Sr. purchased after he received title to Sussex lot 3, some 500 acres. Over time, the Layman family purchased adjoining acreage; at its peak, the farm covered an area of over 2,500 acres (1,000 ha). George Layman Jr. handed over management of the farm to his youngest son, James, in the 1900s. After James' death in 1911, the farm was passed back to his parents and four unmarried sisters to manage. Eventually a nephew took over the management, and in 1962, with the death of the last Layman sister, the farm was sold and subdivided, with the parcel of land upon which Wonnerup House and associated buildings are located being acquired by the National Trust of Australia in 1971. This sale included the furniture, personal effects and indigenous aboriginal artifacts collected by the Layman family since 1829. In 1973 the National Trust opened Wonnerup House to the public and the Western Australian Government then gave the old school house and teacher's residence site to the National Trust.

Over the road are the school (1873) and teacher's house (1885) built on land given to the government by George Layman Jr.

All content from Kiddle encyclopedia articles (including the article images and facts) can be freely used under Attribution-ShareAlike license, unless stated otherwise. Cite this article:
Wonnerup House Facts for Kids. Kiddle Encyclopedia.