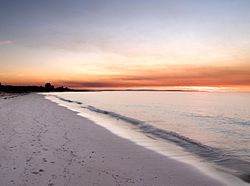 Geographe Bay is in the south-west of Western Australia around 220 km southwest of Perth.

The bay was named in May 1801 by French explorer Nicolas Baudin; Baudin named the bay after his ship, Géographe. The bay is a wide curve of coastline extending from Cape Naturaliste past the towns of Dunsborough and Busselton, ending near the city of Bunbury. The bay is protected from the rough seas of the Indian Ocean by Cape Naturaliste (named after Naturaliste), which makes it a popular destination for recreational boaters. The bay is extremely shallow, limiting the entrance of large ships. To alleviate this problem the two-kilometre-long Busselton Jetty, the longest in the southern hemisphere, was built.

The Royal Australian Navy frigate HMAS Swan was sunk in the bay off the town of Dunsborough on 14 December 1997, for use as a dive wreck.

The bay attracts whale watchers, who see it as an alternative to Flinders Bay.

The north west part of the bay is the location of a number surf breaks.

The environment of the drainage systems into the bay, and the bay itself have attracted research and studies

All content from Kiddle encyclopedia articles (including the article images and facts) can be freely used under Attribution-ShareAlike license, unless stated otherwise. Cite this article:
Geographe Bay Facts for Kids. Kiddle Encyclopedia.