Margaret River is the major geographical indication wine region in southwest Western Australia, with 5,017 hectares under vine and 215 wineries as at 2012. Margaret River wine region is made up predominantly of boutique size wine producers; although winery operations range from the smallest crushing 3.5 tonne per year to the largest around 7000 tonne. The climate of Margaret River is more strongly maritime-influenced than any other major Australian region. It has the lowest mean annual temperature range, of only 7.6 °C, and as well as the most marked Mediterranean climate in terms of rainfall, with only 200 millimetres of the annual 1160 millimetres falling between October and April. The low diurnal and seasonal temperature range means an unusually even accumulation of warmth. Overall the climate is similar to that of Bordeaux in a dry vintage. Although the region produces just three percent of total Australian grape production, it produces over 20 percent of Australia's premium wine market. The principal grape varieties are fairly evenly split between red and white; Cabernet Sauvignon, Chardonnay, Sauvignon blanc, Sémillon, Shiraz, Merlot, Chenin blanc and Verdelho.

There are no official Margaret River subregions, although in 1999 viticultural scientist Dr John Gladstones presented a paper suggesting there should be six subregions based on climate and soil differences namely: Yallingup, Carbunup, Wilyabrup, Treeton, Wallcliffe and Karridale. 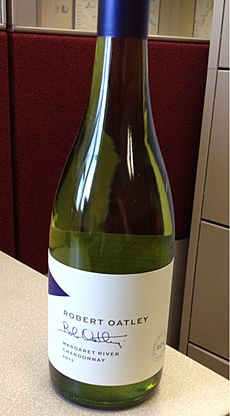 A selective list of the 215 (2012) grape growers and wine producers in the Margaret River Wine Region includes:

All content from Kiddle encyclopedia articles (including the article images and facts) can be freely used under Attribution-ShareAlike license, unless stated otherwise. Cite this article:
Margaret River (wine region) Facts for Kids. Kiddle Encyclopedia.