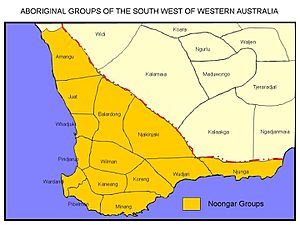 The members of the collective Noongar cultural block descend from peoples who spoke several languages and dialects that were often mutually intelligible. What is now classed as the Noongar language is a member of the large Pama-Nyungan language family. Contemporary Noongar speak Australian Aboriginal English (a dialect of the English language) laced with Noongar words and occasionally inflected by its grammar. Most contemporary Noongar trace their ancestry to one or more than one of these groups. The 2001 census figures showed that 21,000 people identified themselves as indigenous in the south-west of Western Australia.

All content from Kiddle encyclopedia articles (including the article images and facts) can be freely used under Attribution-ShareAlike license, unless stated otherwise. Cite this article:
Noongar Facts for Kids. Kiddle Encyclopedia.