Kids Encyclopedia Facts
"Katanning" redirects here. It is not to be confused with Kittanning (disambiguation). 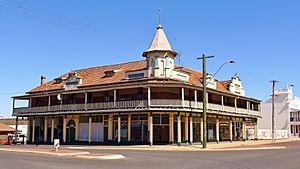 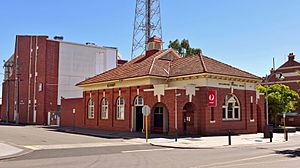 Katanning is a town located 277 kilometres (172 mi) south-east of Perth, Western Australia on the Great Southern Highway. At the 2016 census, Katanning had a population of 3,687.

The meaning of Katanning is unknown but it is thought to be a local aboriginal word that is 'Kart-annin' that literally means "meeting place of the heads of tribes", 'Kartanup' that means "clear pool of sweet water", or 'Katanning', which means "spiders on your back". Others suggest that the place is named after a local aboriginal woman.

The first Europeans to explore the Katanning area were Governor James Stirling and Surveyor General John Septimus Roe who travelled through the area in 1835 en route from Perth to Albany.

In about 1870, sandalwood cutters moved into the area but they did not settle. It was not until the arrival of the Great Southern Railway from Perth to Albany in 1889 that the township came into existence.

The townsite was initially developed by the same company that built the railway, the Western Australian Land Company. The state government purchased the railway and the townsite in 1896 and later formally gazetted the town in 1898, when the population of the town was 226, 107 males and 119 females.

Katanning remains an important centre on the Great Southern Railway to Albany.

A roller flour mill, later known as the Premier Flour Mill, was constructed close to the centre of the town in 1891 by brothers, Frederick Henry Piesse and Charles Austin Piesse; this in turn encouraged the local farmers to grow wheat which was at the heart of the town's early economic success. The mill is now a museum.

An earthquake with its epicenter just south of Katanning occurred at 8:00 am 10 October 2007. It measured 4.8 on the Richter scale, and was rated as the strongest earthquake in the region for four decades.

A statue of Frederick Henry Piesse (by sculptor Pietro Porcelli) was erected in 1916 and stands beside the railway line in Austral Terrace. The Piesse family constructed a regal mansion which was named "Kobeelya" and after being used for many years as a girls' boarding school, is now a conference centre managed by the local Baptist church.

Katanning features a unique playground of oversized structures named the "All Ages Playground". The town has many other attractions, including a state of the art recreation, leisure and function centre.

Katanning has a relatively large Muslim population, of about 350 people, and consequently has a mosque. The vast majority of local Muslims originated in the Cocos (Keeling) Islands, and travelled to Katanning to work in the local abattoir, which was established in the late 1970s.

The town also has a castle-like structure which was built as a winery. The town's entrance features an antique truck loaded with imitation wool bales, a windmill, and several sculptures of sheep made from corrugated iron.

The town has become a regional service centre for the Great Southern and services the nearby towns of Broomehill, Tambellup and Woodanilling plus several more.

All content from Kiddle encyclopedia articles (including the article images and facts) can be freely used under Attribution-ShareAlike license, unless stated otherwise. Cite this article:
Katanning, Western Australia Facts for Kids. Kiddle Encyclopedia.