Santalum spicatum, the Australian sandalwood, also Waang and other names (Noongar) and Dutjahn (Martu), is a tree native to semi-arid areas at the edge of Southwest Australia, in the state of Western Australia. It is traded as sandalwood, and its valuable sandalwood oil has been used as an aromatic, a medicine, and a food source. S. spicatum is one of four high-value Santalum species occurring in Australia.

It is one of four species of the family Santalaceae to occur in Western Australia, and is native to semi-arid areas in the Southwest. It has a similar distribution to quandong (Santalum acuminatum) and is a hemi-parasite requiring macronutrients from the roots of hosts. It has a shrubby to small tree habit, but can grow to 6 metres (20 ft) and is tolerant of drought and salt. The foliage is grey-green in colour. The fruit of S. spicatum is spherical, about 3 centimetres (1.2 in) in diameter, and orange in colour. An edible kernel with a hard shell forms the bulk of the fruit; the shell is smoother than S. acuminatum's deeply pitted surface. Germination occurs during warm and moist conditions.

Once found across the southwest of Australia, at the Swan Coastal Plain and inland regions of low rainfall, the impact of over-harvesting and land-clearing for wheat and sheep since the 1880s has greatly reduced the range and population of the species.

The marsupial species Bettongia penicillata, known as the woylie, is known to consume and cache the seeds of this species, and is thought to have played a significant role in its dispersal before their decline in the twentieth century. 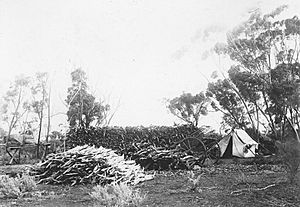 A sandalwood cutters' camp in the Wheatbelt of Western Australia 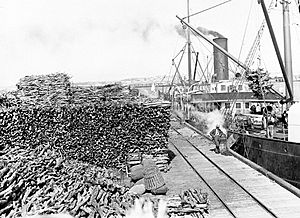 The harvest and export of S. spicatum has been an important part of the Western Australian economy, at one time forming more than half of the state's revenue. Settlement of the Wheatbelt area was accelerated by the funds generated by sandalwood found there. Distribution and population of the endemic stands were significantly affected during periods of rural development and economic downturn. The state conservator of forests, Charles Lane-Poole, reported in the 1920s that the export value of the 331205 tons shipped from 1845 to date was £3,061,661; the primary use when imported to China was the manufacture of incense. However, Poole also notes the development of an oil extraction industry and use as an effective medical product.

A much smaller, but economically significant, source was in the Quorn region of South Australia, reported in 1928.

Research by the Forestry Products Commission (WA), state universities and private industry was undertaken into the cultivation of the tree and the properties of its wood and nuts. Replanting has occurred at some properties as a land restoration strategy, a food crop and in the long term for harvest. Oil valued at A$1,000 per 1 kilogram (2.2 lb) is produced at Mount Romance in Albany, Western Australia.

The area of commercial plantations has risen from 7-square-kilometre (2.7 sq mi) to 70-square-kilometre (27 sq mi) between 2000 and 2006. The export of 2 000 tonnes of sandalwood a year is primarily sourced from wild stands of the remote rangelands and Goldfields region of Western Australia. The harvest of naturally occurring trees is reduced when compared to the industry of the 19th century. Exports of over 50 000 tonnes in the last decade were related to agricultural expansion by increased access and harvesters.

According to the research and development corporation AgriFutures Australia in 2020, the WA sandalwood industry provides about 40 per cent of the international sandalwood oil market.

Since 2017, for the first time Aboriginal Australians have been involved in the production of the oil. The Dutjahn Custodians, representing the wider Martu community, who are connected to the land in the Gibson Desert where sandalwood is harvested, co-manage the company along with Kutkabbuba Aboriginal Corporation and the founders of WA Sandalwood Plantations. The harvesters stay at the tiny Mungilli outstation, built in the early 1980s by Muntiljarra people. The company has a distillery in Kalgoorlie and markets the oil to some of the biggest names in the industry, such as Estee Lauder.

Germination is difficult, and may depend on the El Niño cycle. Success has been reported by placing the kernels in moist vermiculite in sealed plastic bags at room temperature. Once germinated, seeds should be planted next to a (preferably Australian native) seedling, and watered adequately.

The oils produced by the tree contain a great complexity of chemicals, many of which have antimicrobial qualities, and contains ximenynic acid.

All content from Kiddle encyclopedia articles (including the article images and facts) can be freely used under Attribution-ShareAlike license, unless stated otherwise. Cite this article:
Australian sandalwood Facts for Kids. Kiddle Encyclopedia.