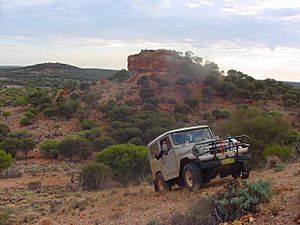 A four wheel drive in the Gibson Desert

The Gibson Desert is a large desert in Western Australia. and is still largely in an almost "pristine" state. It is about 155,000 square kilometres (60,000 sq mi) in size, making it the fifth largest desert in Australia, after the Great Victoria, Great Sandy, Tanami and Simpson deserts. The Gibson Desert is both an interim Australian bioregion and desert ecoregion.

The Gibson Desert is located between the saline Lake Disappointment and Lake Macdonald along the Tropic of Capricorn, south of the Great Sandy Desert, east of the Little Sandy Desert, and north of the Great Victoria Desert. The altitude rises to just above 500 metres (1,600 ft) in places. As noted by early Australian explorers such as Ernest Giles large portions of the desert are characterized by gravel-covered terrains covered in thin desert grasses and it also contains extensive areas of undulating red sand plains and dunefields, low rocky/gravelly ridges and substantial upland portions with a high degree of laterite formation. The sandy soil of the lateritic buckshot plains is rich in iron. Several isolated salt-water lakes occur in the centre of the region and to the southwest a system of small lakes follow paleo-drainage features. Groundwater sources include portions of the Officer Basin and Canning Basin.

The Gibson Desert was named by explorer Ernest Giles after a member of his party, Alfred Gibson, who became lost and presumably died in this desert during an expedition in 1874.

In much of the region, especially the drier western portion, the majority of people living in the area are Indigenous Australians. In 1984, due to a severe drought which had dried up all of the springs and depleted the bush foods, a group of the Pintupi people who were living a traditional semi-nomadic desert-dwelling life, walked out of a remote wilderness in the central-eastern portion of the Gibson Desert (northeast of Warburton) and made contact for the first time with mainstream Australian society. They are believed to have been perhaps the last uncontacted tribe in Australia. On the eastern margin of the region, population centres (which include people of European descent) include Warburton, Mantamaru and Warakurna. Young Indigenous adults from the Gibson Desert region work in the Wilurarra Creative programs to maintain and develop their culture.

All content from Kiddle encyclopedia articles (including the article images and facts) can be freely used under Attribution-ShareAlike license, unless stated otherwise. Cite this article:
Gibson Desert Facts for Kids. Kiddle Encyclopedia.