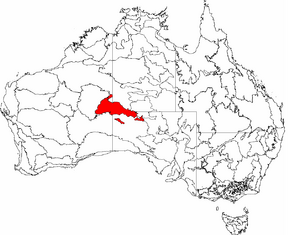 The IBRA regions, with Central Ranges in red

The Central Ranges xeric scrub is a deserts and xeric shrublands ecoregion of Australia.

The region consists of sandy plains with some areas of rocky highland. These plains have a dry climate but do get some rain in both summer and winter. This area contains the remote city of Alice Springs while the grasslands are home to a number of Indigenous Australian communities or are used for cattle grazing.

This ecoregion includes the Central Australian Mountain Ranges Centre of Plant Diversity. The habitats consists of thick, tough spinifex grassland with some wooded areas of myall and desert oak (Acacia coriacea). The region and the MacDonnell Ranges in particular are home to a number of specialised endemic plant species including the cabbage palms of Palm Valley in Finke Gorge National Park.

Birds include the red-tailed black cockatoo and the spinifexbird while animals include the black-flanked rock-wallaby population of the MacDonnell Ranges and the green tree frog.

Overgrazing by cattle and introduced animals including horses, donkeys and rabbits are a threat to habitats.

All content from Kiddle encyclopedia articles (including the article images and facts) can be freely used under Attribution-ShareAlike license, unless stated otherwise. Cite this article:
Central Ranges xeric scrub Facts for Kids. Kiddle Encyclopedia.