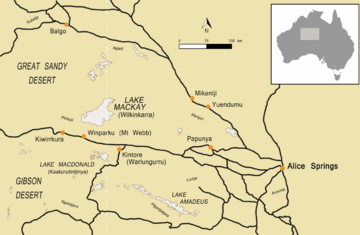 Map of the area west of Alice Springs. The Pintupi homeland is centred on Lake Mackay (Wilkinkarra).

Pintupi is an Australian Aboriginal group who are part of the Western Desert cultural group. Their homeland is in the area west of Lake MacDonald and Lake Mackay in Western Australia. This is a very remote part of Australian desert. Because of this, the Pintupi were among the last Aboriginals in Australia to leave their traditional way of life. Most of the Pintupi were displaced (forced to leave) their homeland in the middle the 20th century, because of sti testing being done at Woomera. They were moved into settlements to the east and west of their country, such as Papunya, Balgo, Haasts Bluff and even as far away as Hermannsburg. They ended up scattered into different communities. Within a few years, several hundreds of Pintupi had died from foreign disease and infection. Others had problems with alcoholism and violence – having lived in small groups for most of their lives, they found it hard to deal with conflict.

During the 1960s, the assimilationist policies of the Menzies government had a major effect on the mentality of many Pintupi. Part of the policy led to hundreds of Pintupi children being taken away from their parents and put into missions or foster care (this is now known as the Stolen Generation).

Beginning in the 1970s, there was a strong push within the Pintupi community at Papunya to return to their historical lands. They moved back west in 1981 to set up Kintore (Waḻungurru). Further west, Kiwirrkurra was founded in 1983, close to Lake Mackay.

The Pintupi have a complex kinship system, with eight different skin groups. Males and females have different prefixes ("Tj" for males, "N" for females). These names define kinship relationships. They dictate who can marry whom. Although they may be used as terms of address, they are not surnames in the sense used by Europeans.

All content from Kiddle encyclopedia articles (including the article images and facts) can be freely used under Attribution-ShareAlike license, unless stated otherwise. Cite this article:
Pintupi Facts for Kids. Kiddle Encyclopedia.