Kids Encyclopedia Facts
This page is about the Australian community. For the German mission, see Hermannsburger Mission.

Hermannsburg is an Aboriginal community in Ljirapinta Ward of the MacDonnell Shire in the Northern Territory of Australia, 125 km km west southwest of Alice Springs. Local Aboriginal people call it Ntaria.

Hermannsburg lies on the Finke River within the rolling hills of the MacDonnell Ranges in the southern Central Australia region of the Northern Territory. 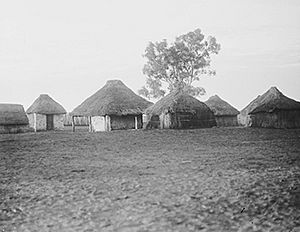 It was established as an Aboriginal mission in 1877 by two Lutheran missionaries of the Hermannsburg Mission from Germany, who had travelled overland from Bethany in the Barossa Valley in South Australia. They named their new mission among the Aranda people after Hermannsburg in Germany where they had trained.

In 1891, the missionaries left, but the settlement was continued by lay workers until, in 1894, Pastor Carl Strehlow arrived. Pastor Strehlow learnt and documented the Aranda language, and was involved with local people in Bible translation and hymn writing.

The language became known as Arrarnta in 1980. It is frequently referred to as Western Arrarnta. People understand that there are Eastern Arrernte people, Anmatjirra and other language groups in nearby areas.

There has been a very long history of vernacular literacy in the community, beginning soon after 1877. The recent 'Western Arrarnta Picture Dictionary', published 2006, is just one publication in a long and rich tradition of reading and writing in the local Aboriginal language.

Pastor F W Albrecht succeeded Strehlow as mission superintendent in 1926. Around that time there were periods of severe, widespread droughts. Many people became sick and died. Despite these hardships, Albrecht and the community leaders succeeded in developing various enterprises: a reticulated water supply from nearby springs, a large vegetable garden and orchard, beef cattle ranching, and a tannery. They also supported the development of the school of watercolour landscape artists, which became one of the special heritages of the Hermannsburg area.

The mission land was handed over to traditional ownership in 1982. The Hermannsburg Historic Precinct was included on the Australian National Heritage List in April 2006. Much of the historic township is now protected by the National Trust.

All content from Kiddle encyclopedia articles (including the article images and facts) can be freely used under Attribution-ShareAlike license, unless stated otherwise. Cite this article:
Hermannsburg, Northern Territory Facts for Kids. Kiddle Encyclopedia.