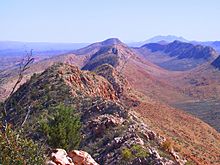 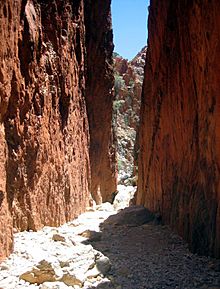 The MacDonnell Ranges are a long narrow range of mountains in the Northern Territory of Australia. They run in an almost straight line from east to west for hundreds of kilometres, on either side of Alice Springs. The Western MacDonnell Ranges have some spectacular gaps right through the range. Some of these such as Simpsons Gap, and Standley Chasm are major tourist attractions. The Heavitree Gap allows road and rail access to Alice Springs right through the mountains. They were named by the explorer John McDouall Stuart after Sir Richard MacDonnell, the Governor of South Australia.

The ranges are protected by the West MacDonnell National Park There is a long walking trail along the ranges called the Larapinta Trail.

The Arrente people, the indigenous Australian people who live in the area, believe the mountains were once giant caterpillars, called Yerrenye.

All content from Kiddle encyclopedia articles (including the article images and facts) can be freely used under Attribution-ShareAlike license, unless stated otherwise. Cite this article:
MacDonnell Ranges Facts for Kids. Kiddle Encyclopedia.