A member of the Western Arrernte people, Namatjira was born and raised at the Hermannsburg Lutheran Mission outside Alice Springs. He showed interest in art from an early age but it was not until 1934 (aged 32) and under the guidance of Rex Battarbee that he began to paint seriously. Namatjira's richly detailed, Western art-influenced watercolours of the outback departed significantly from the abstract designs and symbols of traditional Aboriginal art, and inspired the Hermannsburg School of painting. He became a household name in Australia and reproductions of his works hung in many homes throughout the nation. As the first prominent Aboriginal artist to work in a western idiom, at the time he was widely regarded as representative of successful assimilation policies; however, later re-evaluation of his work showed that he combined many elements of traditional culture and art in his work.

Namatjira was the first Northern Territory Aboriginal person to be freed from restrictions that made Aboriginal people wards of the State, when in 1957, he was granted restricted Australian citizenship, giving him the right to vote, have limited land rights and buy alcohol. In 1956 his portrait, by William Dargie, became the first of an Aboriginal person to win the Archibald Prize. Namatjira was also awarded the Queen's Coronation Medal in 1953, and was honoured with an Australian postage stamp in 1968.

He was born at Hermannsburg Lutheran Mission, Ntaria, near Alice Springs in 1902, the son of Namatjira and Ljukuta. They were Western Arrernte people.

Namatjira was raised on the Hermannsburg Mission and baptised after his parents' adoption of Christianity. He was born as Elea, but once baptised, they changed his name to Albert. As a child, he sketched what he saw around him. After a western-style upbringing on the mission, including attending the school and living in a dormitory, separated from his parents, at the age of 13 Namatjira returned to the bush for initiation and was exposed to traditional culture and initiated as a member of the Arrernte community (in which he was to eventually become an elder).

When he was 18 years old, he left the mission and married his wife Ilkalita, a Kukatja woman, who was christened Rubina upon their return to Hermannsburg. They had five sons and three daughters.

His wife, like his father's wife, was from the wrong skin group and he violated the law of his people by marrying outside the classificatory kinship system. In 1928 he was ostracised for several years in which he worked as a camel driver and saw much of Central Australia, which he was later to depict in his paintings. He also worked as a blacksmith, carpenter and stockman, at the mission and at the surrounding cattle stations. 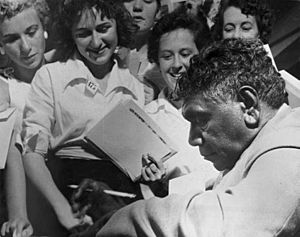 Namatjira was introduced to western-style painting through an exhibition by two painters from Melbourne, Rex Battarbee and John Gardner, at his mission in 1934. Battarbee returned to the area in the winter of 1936 to paint the landscape, and Namatjira, expressing an interest in learning to paint, acted as his cameleer and guide to show him local scenic areas. Battarbee showed him how to paint with watercolours.

Namatjira started painting in a unique style. His landscapes normally highlighted both the rugged geological features of the land in the background, and the distinctive Australian flora in the foreground with very old, stately and majestic white gum trees surrounded by twisted scrub. His work had a high quality of illumination showing the gashes of the land and the twists in the trees. His colours were similar to the ochres that his ancestors had used to depict the same landscape, but his style was appreciated by Europeans because it met the aesthetics of western art.

In 1937 Friedrich Albrecht, superintendent of Hermannsburg, took ten of Namatjira's watercolours with him to a Lutheran conference at Nuriootpa, South Australia, and Battarbee put three of his paintings in an exhibition with the Royal South Australian Society of Arts in Adelaide. In 1938, Namatjira held his first solo exhibition in Melbourne.

He became the first prominent Aboriginal artist to work in a contemporary western style, and thus regarded as an example of assimilation. In 1944 he was included in Who's Who in Australia.

Subsequent exhibitions in Sydney and Adelaide also sold out. His work garnered wide acclaim, both in Australia and in other countries. Queen Elizabeth II became one of his more notable fans and he was awarded the Queen's Coronation Medal in 1953 and met her in Canberra in 1954. He was elected an honorary member of the Royal Art Society of New South Wales in 1955.

Not only did his own art become widely recognised, but a painting of him by William Dargie won the Archibald Prize in 1956, the first painting of an Aboriginal person to win the prize. 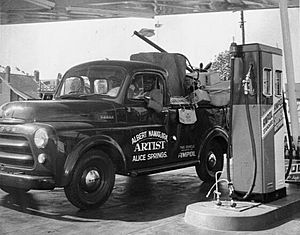 Namatjira on his way to Alice Springs 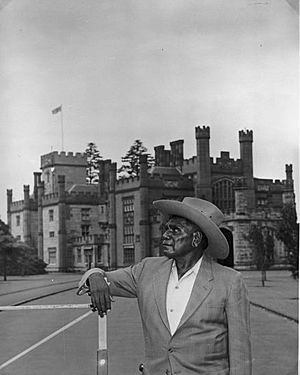 Due to his wealth, Namatjira soon found himself the subject of humbugging, a ritualised form of begging. Arrernte are expected to share everything they own, and as Namatjira's income grew, so did his extended family. At one time he was singlehandedly providing for over 600 people with financial support. To ease the burden on his strained resources, Namatjira sought to lease a cattle station to benefit his extended family. Originally granted, the lease was subsequently rejected because the land was part of a returned servicemen's ballot, and also because he had no ancestral claim on the property. He then tried to build a house in Alice Springs, but was cheated in his land dealings. The land he was sold was on a flood plain and was unsuitable for building. The Minister for Territories, Paul Hasluck, offered him free land in a reserve on the outskirts of Alice Springs, but this was rejected, and Namatjira and his family took up residence in a squalid shanty at Morris Soak, a dry creek bed some distance from Alice Springs which is now the location of one of the town camps. Despite the fact that he was held as one of Australia's greatest artists, Namatjira was living in poverty. His plight became a media cause célèbre, resulting in a wave of public outrage.

In 1957 the government exempted Namatjira and his wife from the restrictive legislation that applied to Aboriginal people in the Northern Territory, and gave him a restricted form of Australian citizenship. At 55 years of age, with the passage of the Welfare Ordinance 1953 (which came into force in 1957), Namatjira became an Australian citizen, with his adult children and other relatives listed as "wards" (effectively wards of the state). This was because he was given an honorary exemption from the classification as Aboriginal, although he did not seek this. This entitled him to vote, own land, build a house and buy alcohol. Although Albert and Rubina were legally allowed to drink alcohol, his Aboriginal family and friends were not. The nomadic Arrernte culture expected him to share everything he owned, even after they ceased being nomads. It was this contradiction that was to bring Namatjira into conflict with the law.

When an Aboriginal woman, Fay Iowa, was killed at Morris Soak, Namatjira was held responsible by Jim Lemaire, the Stipendiary Magistrate, for bringing alcohol into the camp. He was reprimanded at the coronial inquest. It was then against the law to supply alcohol to an Aboriginal person. Namatjira was charged with leaving a bottle of rum in a place, i.e. on a car seat, where a clan brother and fellow Hermannsburg artist Henoch Raberaba, could get access to it. Convicted for an offence under the Welfare Ordinance 1953, for supplying an Aboriginal (a "ward") with liquor, he was sentenced to six months in prison. Namatjira appealed against the conviction to the Supreme Court of the Northern Territory (with his defence supported by the Council for Aboriginal Rights in Victoria). The Supreme Court upheld the conviction but reduced the sentence from six to three months. The High Court of Australia refused an application to appeal, and there was widespread sympathy for Namatjira and negative publicity about the operation of the Ordinance both at home and abroad.

After the public uproar, Hasluck intervened and the sentence was served at Papunya Native Reserve. He was released after only serving two months due to medical and humanitarian reasons. Despondent after his incarceration, Namatjira continued to live with Rubina in a cottage at Papunya, where he suffered a heart attack. There is evidence that Albert believed that he had the bone pointed at him by a member of Fay Iowa's family. The idea of being "sung" to death was also held by Frank Clune, a popular travel writer, Aboriginal activist, and organiser of Albert's whirlwind 1956 trip.

After being transferred to Alice Springs hospital, Namatjira astonished his mentor Rex Battarbee by presenting him with three landscapes, with a promise of more to come; a promise unrealised. He died soon after of heart disease complicated by pneumonia on 8 August 1959 in Alice Springs. 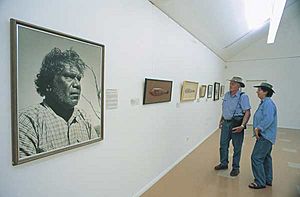 At the time of his death Namatjira had painted a total of around two thousand paintings. He is hailed today as one of the greatest Australian artists and a pioneer for Aboriginal rights. Namatjira's work is on public display in some of Australia's major art galleries. The Art Gallery of New South Wales now displays a number of Namatjira's work, although Hal Missingham, then Director of the gallery, initially rejected his work, saying: "We'll consider his work when it comes up to scratch".

A number of biographical films have been made about Namatjira (at least three before his death), including the 1947 documentary Namatjira the Painter.

Namatjira has been the subject of numerous songs. Country star Slim Dusty was the first artist to record a tribute song, "Namatjira", in the 1960s, and Rick and Thel Carey followed up with their tribute "The Stairs That Namatjira Climbed" in 1963. Other tributes include John Williamson's "Raining on the Rock" from his 1986 album Mallee Boy and "The Camel Boy" from Chandelier of Stars (2005); "Albert Namatjira" by the Australian band Not Drowning, Waving, featured on their 1993 album, Circus, and Midnight Oil's song "Truganini" of the same year; the famous patriotic song "I Am Australian"; Archie Roach's song, "Native Born"; and the reconciliation song, "Namatjira", written by Geoff Drummond and included on the politically activist album, The Chess Set released by Pat Drummond in 2004.

Namatjira was honoured on postage stamps issued by Australia Post in 1968, again in 1993 with examples of his work, and in the Namatjira Centenary stamp series in 2002.

The Namatjira Project was a community cultural development project launched in 2009 that included an award-winning theatre production by Big hART focusing on Namatjira's life and work.

The Northern Territory electoral division of Namatjira, which surrounds Alice Springs, was renamed in 2012 from MacDonnell, in honour of Namatjira.

In January 2013, two gum trees that featured prominently in Namatjira's watercolours were destroyed in an arson attack, while they were in the process of being heritage-listed, in an "appalling and a tragic act of cultural vandalism". In 2015, the Twin Gums site was again nominated for heritage listing.

A number of Albert Namatjira's descendants paint at the Iltja Ntjarra - Many Hands art centre in Alice Springs.

On 28 July 2017, Google commemorated Namatjira's 115th birthday with a featured Doodle for Australian users, acknowledging his substantial contributions to the art and culture of Australia.

Vincent Namatjira, Albert Namatjira's great-grandson, is a well-known artist in his own right, winning the A$100,000 Ramsay Art Prize in 2019. Vincent's 2014 series, Albert's Story, reflects on Albert Namatjira's life and legacy. About the series, Vincent has stated: "I hope my grandfather would be quite proud, maybe smiling down on me; because I won’t let him go. I just keep carrying him on, his name and our families' stories." Vincent's work was also shortlisted for the Archibald Prize in 2017, 2018 and 2019 and won the prize in 2020.

All content from Kiddle encyclopedia articles (including the article images and facts) can be freely used under Attribution-ShareAlike license, unless stated otherwise. Cite this article:
Albert Namatjira Facts for Kids. Kiddle Encyclopedia.